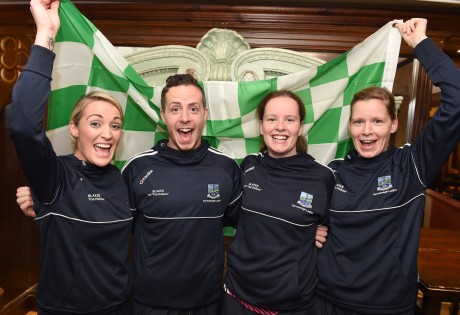 READY FOR CROKE PARK.. Tara, Aidy, Sharon and Caroline Little are ready and eager to get to Croke Park on Sunday.

FAMILY and football. That’s the way it is with Aidy, Caroline, Sharon and Tara Little.

Between kicking ball for the successful Lisnaskea Emmet’s club and starring for the county, there aren’t too many evenings of the week they don’t spend in each others company.

Aidy, Caroline and Sharon are siblings, with Tara, Aidy’s wife, part of the collective for about 15 years now. Talking to the four together away from the hubbub in Blake’s of the Hollow there’s clearly a strong bond among the four. Tara is the most outgoing with a warm outgoing personality. Aidy and Caroline are chatty too, while Sharon is more reserved, but when she talks it is always with a purpose, clear and direct. They are a surprisingly diverse bunch of people, but they combine to magnificent effect when it comes to the field of play.

As we talk it’s clear football occupies a central role in their lives and their relationships with one another. It defines the family, their lives revolve around it. When you sacrifice so much together it isn’t surprising that that all speak with such conviction, focus and seriousness about their football. But more than anything what shines through is their determination to bring All-Ireland glory back to Fermanagh this Sunday.

John Hughes: So, where did the Little obsession with GAA start?
Aidy Little: Mammy says she played camogie at school, but we never saw her in action. Daddy would tell you that he was the one that got us out there. But it was the two of them together, if you wanted anything for football it was the first thing that was got.

JH: Who was the first to pull on the boots?
Aidy: Paul would have been the first and then the three brothers went together to the area league, that’s where it would have all really started.

JH: Was it a case of the sisters tagging along to games then or where did the interest start?
Caroline: It was always the big green [in Lisnaskea], the park where we would have messed about. Ladies football wouldn’t have been going at that stage. I remember the first time we played it would have been in Clifford’s field, and that would have been a long time ago when I was about 14 and that was when it was starting.
Aidy: It was late starting in our club.

JH: When there are a number people in the same family playing the same sport they tend to push each other on. Was that how it worked in the Little household?
Caroline: I know if I was to do anything wrong that Sharon wouldn’t be slow to let you know and vice versa. We keep each other on our toes I suppose you could say.

JH: I suppose it’s a help when you’re doing the boring stuff like gym work that you have to do away from the team?
Tara: Those two wouldn’t do as much as a stretch! They just go to training and come home.
Sharon: We don’t do extra work.
Tara: And they’re never injured.
Caroline: Well you’re training four or five nights a week.
Sharon: Because you have club and county, you see.

JH: Tara, when did you join the Little collective?
Tara: I met Aidy about 15 years ago. We met at the Tech formal, that’s when I first would have met him. He was actually doing DJ that night and he spotted me from above!
I used to play for Roslea and then they folded, so then I transferred down to ‘Skea and I’ve practically been playing with them all along.

JH: So when it comes to travelling to the matches how does that work. Do you all sit in the one bunch or scatter to different corners of the bus?
Tara: We’d all sit near each other and have the banter

JH: There are some county sides that can be dominated by the players from a particularly strong club. Does it work like that in Fermanagh.
Caroline: No, because you have three or four strong player from ‘Skea, then you’ll have the same from Newtown and so on. It means we have an even spread. Our ‘Skea team would be very young, bar four or five of us. That would be the same in nearly every other club.

JH: Fermanagh were in the third semi-final in as many years, what was it like to beat Roscommon and finally get across the line?
Tara: I think it was just pure elation that we’d actually won. Especially after what had happened last year in the semi-final and the way we went out. I think everyone was just so devastated after that game that it took us a while go get back from that this year. Even at the start of the season this year no one would have predicted that we would be in an All-Ireland final at this point.
Things weren’t going well. People were still hurting and it took us a bit of time to get everybody out. I think then when we got everybody out and when we had such a young side, which we might not have had in previous years. It just seems to have blended perfectly together and in the last couple of games it has all been working out. So after the final whistle in the semi-final it was a real outpouring of emotion.

JH: Talk to me a bit about Lisa Wood’s contribution.
Tara: I think it is the whole lot of them as a unit that have brought it out of us.
Caroline: I think it is because Lisa didn’t know anyone coming in. She had to get to know everyone and pick a team from that. In previous years some people knew the players and those players were getting picked. So she has probably helped get the younger ones out. They knew they’d get a chance because they knew they’d get a hearing. Then obviously when Aidy came he could give her a bit of advice, you know, ‘They’d be good in this position.’ That sort of thing. They work well with each other.
Sharon: She brings good enthusiasm to it as well. It’s her first year in management and she wants to do well. It’s a whole new thing for her and she’s enthusiastic about it and as we’re doing better and better she’s getting more into it and feeding off it.

JH: With Aidy on the line what’s it like having a conduit into the management team?
Caroline: No good!
Tara: He doesn’t tell us anything!
Sharon: It’s probably worse that anything. If you’re bad, you’re bad, and Aidy would tell you that. And then maybe you might say to him, ‘Well maybe you didn’t do this or that.’
Tara: We probably get criticised more than other players on the team because we’re close.
Sharon: We hear it all.

JH: What about the challenge Down present?
Caroline: We’ve played them three times this year and they’ve beaten us every time. We’re hoping that this will be the third time lucky.
Sharon: It’s always been tight, no matter what way it goes there’ll only be a couple of points in it. We know each other that well. It’s hard to escape, they know who plays where and what role they fulfil and we know the same about them. It will just come down to whoever performs better on the day.

JH: Down tend to go the end of the game. How do you plan for that?
Aidy: Goals can be very dangerous. In our last game we were six points up with two minutes to go to half time and then it was a draw. That sort of thing could happen easily again in the final, we just have to be mentally ready.
We’ve had the sports psychologist Paul McIver in helping us on those sorts of things. He’s come down a couple of times and worked with the girls. He’s been driving into us the importance of keeping going. It seems to be rubbing off on some more than other. Some people take better to that sort of input. For those who respond to that sort of input it seems to be working. I think it has helped.

JH: Any special plans for the final whistle if you happen to be on the right side of the result?
Aidy: There’s no special plans. If we win we’ll just be going mad. The we the first thing we’ll do is run over to each other. When it sinks in you’ll be looking for certain people and you’ll just run towards them.
Tara: If we win that’ll be enough.