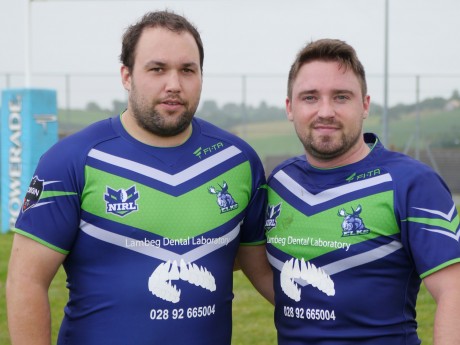 TWO local rugby players represented Northern Ireland at the weekend in the first ever of its kind Rugby League State of Origin.

Both Nick and Rodney were involved in four training sessions after being selected, having played their club games this season for Ballynahinch Rabbitohs.

Late scores for both sides had the crowd at Dromore on the edge as either side could have picked up a vital victory in the two game series however, in what was a just result the spoils were shared 18 apiece. In the game itself Bennett, playing prop and Finlay half-back, had key roles to play in securing a well-earned draw.

Finlay kicked two conversions and a penalty at the end of the match to secure the draw. He also set up a try with a neat crossfield kick. Bennett meanwhile impressed with his strong carrying and defence.

Speaking after the game Nick Finlay was proud to pull on the Northern Ireland jersey, having previously represented Ireland A in the same sport.

“It was great to be part of the first ever Rugby League State of Origin and represent Northern Ireland. We went into the game as heavy underdogs as they had 5 or 6 full Irish internationals but in the end we were disappointed not to get the win. It was a very physical game and both teams played good rugby to very the end. Hopefully we can get the job finished next weekend.”

The result sets up a nail biting second game next Saturday in Ashbourne with the winner taking home the 2014 State of Origin Trophy.