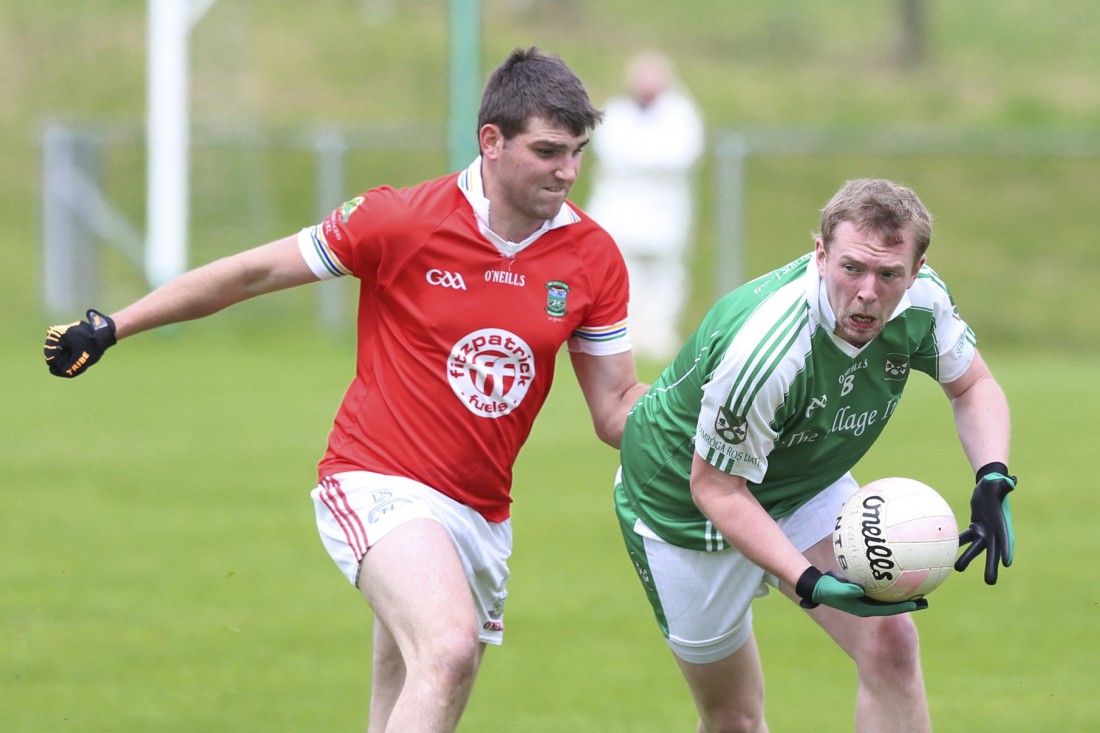 Niall Mohan of Newtown closing in on Daniel Mohan of Roslea

Roslea are the merited winners here but they were a shade flattered by the extent of their final winning margin.

Well into the final ten minutes the game was still alive as a contest as Newtown who had turned over for the second half had managed to up the tempo of their game and had trimmed the deficit down to just three points.

Roslea still the side more likely to come out on top but they had found themselves pressed hard enough by a spirited opposition.

In the end Roslea were to finish with a sizeable cushion as they rounded off the day with a decisive two goal burst that catapulted them more than comfortably clear.

Roslea in fact were very quick to hit the goal trail as they snapped up the first of the four they were to collect with Sean Quigley finding the net from close range on just four minutes. It was a tonic opener for the Shamrocks and they were never to surrender the lead for the remainder of the hour.

They grabbed their second goal close to the interval, another long ball hoofed deep into the heart of the Newtownbutler goal area. Again there was no decisive fielding by the First Fermanagh defenders and the broken ball fell to Nigel Cosgrove who swept home the opportunity.

Points for Roslea over the first half had come on a fairly regular basis the pick of them being a particularly notable effort from Seamus Quigley with Niall Cassidy also on target for them.

Newtownbutler however had not been totally outgunned and they kept themselves reasonably in touch with half a dozen points in response, on the board for them were Brendan McBrien, James Connolly and Ryan Carson.

On the changeover Newtown made a strong bid to narrow the gap and they did have a measure of success with Colm Monaghan putting in a solid challenge for them in the middle of the park and as the game headed into the final ten minutes they were there with a shout.

But the best that they were to manage was a three point gap and in the run in to the finish the game was ripped from them as Roslea plundered two more goals.

Sean Quigley hit the first of the brace and Nigel Cosgrove added the second after a 45 had been spiralled deep into the Newtown goalmouth.

For Newtown corner back Jarlath Jackman did a good job of work in containing immediate opponent Shane Lynch while Colm Monaghan in the middle third and Conor Beggan at corner forward were also prominent in the side’s committed effort.

For Roslea Sean Quigley was again one of the team’ s most influential figures and Peter Sherry was the hub of the defensive performance.