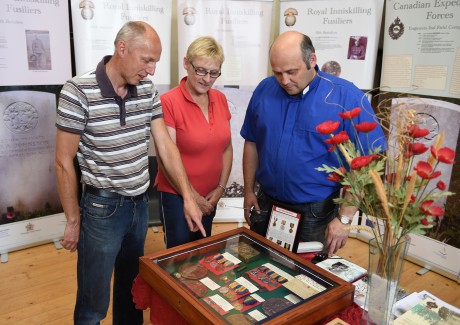 MEDALS.. Gary Milligan, Anne Keys and Rev Alan Irwin admire some of the medals on display

THE Kesh Young Farmers Hall was the setting last week for ‘North Fermanagh Remembers’ – an exhibition to commemorate the 100th anniversary of the start of World War One.

The exhibition set up by local man David Keys was held to remember the names of those who lost their lives at war and are listed on memorials in Colaghty, Adress and Tubrid Parish Churches, the Public Memorial at Main Street, Pettigo and others who have no memorial in their home area.

Before the exhibition opened David knew of 41 people from the local area who lost their lives during the Great War, but through visitors coming through the doors he has learnt of two more from the area who served during the conflict.

“I researched 41 names from North Fermanagh and to include the Pettigo area of County Donegal 39 of these were on memorials.

“Neither of these had memorials in their local area and although on the County memorial it was not apparent that they were from the North Fermanagh area.”

He continued: “The exhibition has been very successful judging by the numbers visiting and the comments, there has been particularly strong interest from the Pettigo area and Donegal in general with a number turning up with medals, World War One documents and mementos belonging to family members who served.

“There was a particularly strong response to recruitment in the Kesh and Pettigo areas in World War One, but overall I am surprised at the amount of interest in the anniversary and the numbers of families who want to find out about there ancestors’ service.”

A total of 27 information banners have been on display commemorating the war and the local effort, while in addition there were items on show including shrapnel from the battlefields, medals and a rifle that was used during the Battle of the Somme.

The opening of the exhibition was held on Friday evening, August 1 and was attended by those who have family links to the deceased, including William Allen from Kesh, whose uncle, Private William Allen, Royal Inniskilling Fusiliers, was killed at the Somme in September 1916.

He has no known grave and his name appears on the Thiepval memorial and on the family gravestone at Tubrid church.

The Allen family are from Portinode, Kesh.

‘North Fermanagh Remembers’ is open for three final days this week in the Young Farmers Hall.