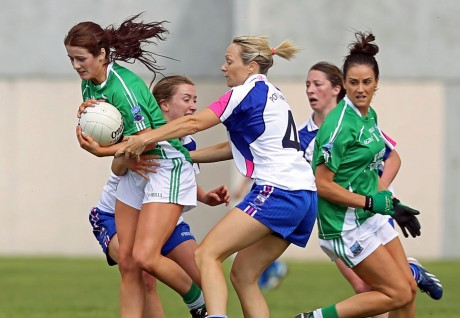 It is hard to believe that it is five years since Fermanagh contested the All Ireland Intermediate final with Clare in Croke Park.

That September day in 2009 ended in heartache. Since then Fermanagh have been looking to scale the mountain again and give themselves another crack at title glory. In 2012 and 2013 that journey ended at the semi final stage.

Thanks to a brilliant win against Waterford at the weekend Fermanagh have earned a third successive semi final, with Roscommon the opponents on Saturday week. Will it be a case of third time lucky? Time will tell but the feeling is with the way this Fermanagh team is progressing luck may not come into it.

They travelled to Dublin to take on Waterford as the underdogs with the Munster girls already eyeing up a potential final against Down but the Erne girls did not read the script and produced a stunning display with one to 15 and all the subs contributing to a memorable occasion.

The game was turned on its head by a wonder strike from Newtownbutler’s Marcella Monahan midway through the second half that squared up proceedings.

The wing half back surged up the field to take a pass from Sharon Little and unleash an unstoppable pile driver to the top corner. Up to that stage Waterford had remained stubbornly elusive for the Fermanagh girls.

Always able to keep that couple of point cushion they were proving a tough nut to crack. Monaghan’s rocket changed that though and although Waterford were to take the lead again they were never able to get far enough in front to be comfortable with Fermanagh finishing much the stronger side.

And when Noelle Connolly fisted across the square for Joanne Doonan to plant the ball to the net for Fermanagh’s third goal the Erne girls were to take a three point lead and from that point they saw out the game to the final whistle eventually winning by four points.

The first half was a testing affair for Fermanagh. Waterford showed plenty of intent and attacking promise to boot.

They were sharp to the ball and dangerous when in possession.

Fermanagh kept in touch however with Sharon Little crashing the ball to the net on the 20 minute mark for a much needed score. Aine McHugh had opened the scoring for Fermanagh after just 25 seconds of the game but they had difficulty in reigning in the pacy Waterford forwards for a 15 minute period in that first half.

They had points from Noelle Connolly who was in fine form all afternoon and with ten minutes to go to the break the Erne girls started to get on top in defence with Tara Little and Monaghan strong in the half back line and Kyla McManus her usually imperious self.

In the middle of the field Fermanagh had lost the services of Caroline Little to a facial injury although the flying Little would return to the fray with ten minutes to play.

Shauna Hamilton, who had been ill in the week coming up to the game, came on for Little with Aisling Moane moving to midfield to partner Aine McHugh and they were to collect plenty of possession as the game wore on.

In the second half Fermanagh were the much better team and outscored their opponents 2-08 to 2-02 with Waterford scoring from the penalty spot just moments after Fermanagh had been denied what looked like a stone wall penalty at the other end.

Indeed it was only those Waterford goals that kept them in the game but as the half wore on it always looked like it would be the Erne girls who would finish the stronger.

Lynn McFrederick, Doonan, the Little sisters and Connolly were all on target with points as Fermanagh took control and with Monaghan and Doonan providing two priceless goals their place in the semi final was secure.