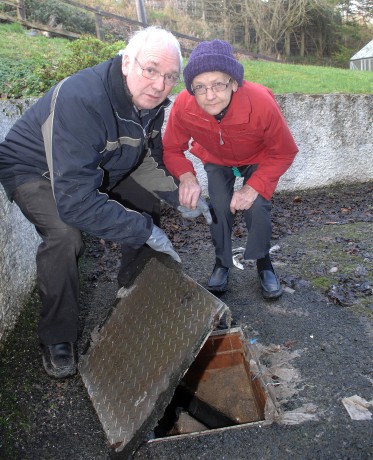 Violet Wilson, from Coleshill Road whose bungalow home suffered spoilage when flood waters entering a storm drawn at the rear of the house forced raw sewage up through four manhole covers. The pensioner is pictured with local builder, Noel Coffey who is replacing one of the manhole covers

A BUSINESS case is being developed which, if implemented, will improve the lot of residents of the in the Danny’s Mill Road/ Coleshilll area of Enniskillen whose homes, in times of heavy rain, are affected by sewage back flow and sewage-related odour problems generally.

It is envisaged that this final phase will complete the work needed to provide a long term solution to the sewerage (ie piping) problems in this area.

It will involve the re-routing of the pumping sewer, with work expected to commence later this year, and completion in early 2015.

Local MLA Phil Flanagan was told, in a written answer, by the Minister for Regional Development, Danny Kennedy, that this solution was emerging as the most economical option to permanently address the immediate odour issues at Danny’s Mill.

Northern Ireland Water representatives are to meet with local residents affected to reassure them of their commitment to have the matter resolved.

Mr Kennedy said he was aware there had been a long-standing issue in the area due to odours emanating from the sewerage system.

He added: “The root cause is the pumped sewage flows entering the system from Rossory Wastewater Pumping Station (WWPS) which is part of the Enniskillen sewerage drainage system.

“NI Water has met local residents on a number of occasions, and has developed a four-phase programme of work to address the issue.”

The first phase involved the removal of five private house  connections and sealing manhole lids on the trunk sewers that run through the area, in order to help contain odours within the sewerage system.

The second phase, which commenced in March last, involves undertaking essential cleaning/repairs to the trunk sewers and sealing additional manhole lids.
This phase was scheduled for completion any time.

Unfortunately, during this construction work, the odours in the area temporarily increased owing to the disturbance of the drainage system, Mr Kennedy added.
The third phase relates to the feasibility of re-routing the pumping sewer and upgrading the Enniskillen sewerage system.

Mr Kennedy explained that this was one of a number of options currently under consideration. It involved re-routing the  pumping sewer from Rossory WWPS, ‘septicity’ dosing to neutralise odours in the pumping main, and  upgrading Rossory and Killynure WWPS as part of the Enniskillen Drainage Area Plan (DAP).