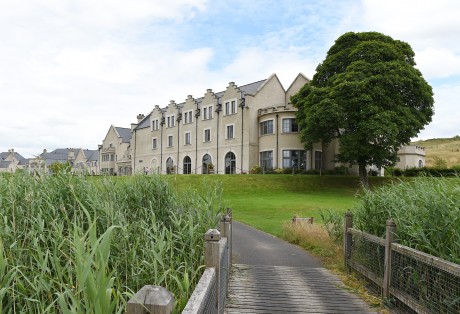 FERMANAGH’S luxury Lough Erne Resort has reportedly been sold for a sixth of its one-time £30 million value to, it is believed, a group of Irish-American businessmen, the Fermanagh Herald can reveal.

It is believed that a deal has been sealed which is substantially less than its originial £10m asking price.

The sale is due to close for the golf venue and luxury hotel within the coming weeks to the group of businessmen who own a number of resorts in the USA.

It has been reported that American property services company  CBRE are conducting the deal on the instructions of receivers John Hansen and Stuart Irwin.

The property has been on the market for several years and has been close to selling more than once, but the process has been complicated by leasehold agreements that interefere with outright ownership.

Twenty-five lodges on the grounds and other parts of the resort are on separate leaseholds.

While the resort has been on the market since September 2012, no specific offers were made, despite the vast coverage it received during the G8 Summit in June last year.

The group of businessmen is not believed to include the resort’s former owner and developer Jim Tracey.

It is thought that the deal will be closing on the sale of the luxury hotel some three years afters its owners went into administration.

The Lough Erne Resort was placed into administration in May 2011 after Bank of Scotland was closed down by Lloyds Banking Group, which then called in debts of around £25m by developers Castle Hume Leisure.

The Irish Open is set to be held at the resort in 2017 which employs 180 people, mainly from the locality.

New manager Andrew Phelan was appointed to the role earlier this year and spoke with the Fermanagh Herald last month.

Mr Phelan said he was excited about challenges facing the resort in the coming months and years.

“This has come out of a huge year, and it’s up to us now to take it to the next level.

“We have to try to take seasonality out of it, that we have a business that’s operating all year round and going from strength to strength.”

However, when contacted by this paper about the sale of the Lough Erne Resort, he failked to comment on the deal.

Fermanagh and South Tyrone MLA Arlene Foster refused to comment on the sale stating that she would wait until the sale “has been completed” and is “not in a position to say anything”.