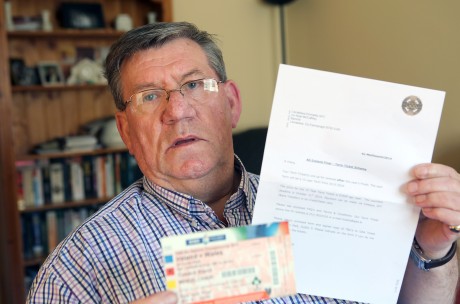 LOCAL GAA supporters are up in arms after the latest increase in price for a 10-year Croke Park  term ticket.

The ten year ticket guarantees a seat at the All Ireland football and hurling finals over the period, but local supporters say it is too much to pay in times of austerity.

The new price means that each match now costs a hefty €175 rather than the previous €125.

Lisnaskea Emmetts club man Noel from Lisnaskea, told the Herald he would not be renewing his ticket as he simply could not afford it.

“I don’t use it now, but my son does. It is an awful rise isn’t it. Speaking to a lot of other boys in town whose term tickets are up for renewal and they agree. You are talking about the age of austerity yet these tickets have gone up massively in price.

“I have been speaking to the people around town and they can’t afford it. It is no longer a working man’s pastime. You look at the Monaghan Armagh game there at Clones and the empty seats. Five years ago and they would have packed the place out. They’re killing the GAA.”

St Pat’s GFC, Donagh members  Paul O’Reilly and his brother Johnny are two others who will not be renewing their tickets.

“No ordinary man could afford it,” explained Paul. “They’re pricing the ordinary person out of it and pricing people out of the big games.”

He continued: “It is a big problem in the GAA; they’re not thinking of the wee boy in Fermanagh and money seems to be taking over, especially when you see they’re selling off to Sky. They’re forgetting the wee man who set them up in the first place.”

Next year will be first time in over 20 years that Paul will not be guaranteed his seat at the All-Ireland final and he admits it is unlikely he will be able to secure a ticket, such is the demand.

“I will definitely enjoy it this year, as it is unlikely next year I will get, I wouldn’t pay that money.”

He told the Herald that the money made from these tickets previously had gone to capital building projects and helped go towards work in the Hogan and Cusack stands.

“There’s a premium for the luxury,” Mr Milton explained.

“I still believe it represents value for money and it guarantees the replay, which as we have seen happen in recent years in the Hurling. Put it this way there’s an 100% take-up and there’s a waiting list. These are the biggest days in our calender and there is obviously a premium for the one-off fixture.”