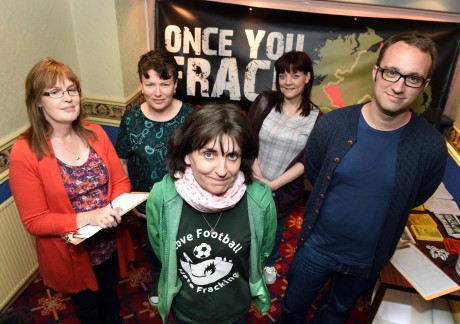 FRACKING in Fermanagh is moving a step closer if you believe  reports from a local anti-Fracking group based in Leitrim.

In a statement sent to the Fermanagh Herald the environmental group ‘Love Leitrim’ alleges that Irish government officials have received a communication from fracking company Tamboran stating its intention to carry out drilling in Fermanagh in a matter of weeks, by summer or early autumn.

The claims, they say, came from a telephone conversation with Irish officials in the Petroleum Affairs Division (PAD) and Eddie Mitchell, chairman of Love Leitrim on Friday, July 11. According to the group, PAD did not give an exact time or location for deep core drilling, with suggestions previously made that a quarry site outside Belcoo was a possible location.

At time of going to press the Herald was unable to get a response from the Irish government division.

As part of its statement released on Monday Love Leitrim claimed that core test drilling in Fermanagh will help Tamboran complete its obligations towards its Irish licence.

Local anti-Fracking election candidate Donal O’Cofaigh however told the Herald that an unnamed Belcoo man had sent a direct information request to the Department of Enterprise and had received a letter back which stated they were not aware of any notice submitted by Tamboran and of any permitted developments or applications in Fermanagh.

A statement from the Fermanagh Fracking Awareness Network (FFAN) called on Tamboran to be fully transparent with the public in regards to their plans and timeline for drilling and Fracking in Fermanagh.

“Tamboran have promised in 2010/11 to be fully transparent with the public with regards to their plans and timeline for drilling and Fracking in Fermanagh.

“Tamboran have stated that they wish to acquire a ‘social license’ before they proceed with their drilling. This ‘social license’ means that Tamboran aims to be so open and persuasive in their dealings with the Fermanagh public to the extent that the public will be in favour of Fracking.

The statement continued: “Therefore FFAN assume that Tamboran will not be carrying out any drilling or exploratory work in the next two months (July/August) as this would be in breach of their own ideals. If Tamboran drill between 5 July and 1st September 2014 (the traditional holiday period and also Stormont Assembly recess) then this would imply that Tamboran are not seeking genuine transparency or interaction either with the public or the publics elected MLA’s and Ministers.”