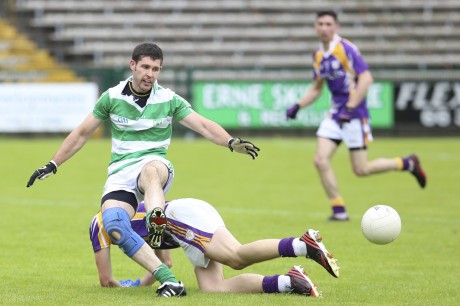 When it comes to the championship league form can mean very little and the truism of that was all too evident in this tie between Teemore and Derrygonnelly.

The Harps have been riding high in the league table while the Shamrocks are labouring at the foot of the table, so of course Derrygonnelly came into this game as the pre match favourites.

The caveat though was always the knowledge that when it comes to championship Teemore are a different animal entirely and such proved to be the case here.

The upshot was that it is Teemore who advance to the quarter finals and Derrygonnelly are left to wait for another season.

The losers can have no complaints about their surprise departure for they produced an indifferent team performance lacking any sense of conviction though they did come close to at least earning another shot.

They had recovered from a slipshod restart to the second half which had seen them drift three points in arrears after they had reached the interval two points clear.

Teemore appeared to have shot their bolt as Derrygonnelly clawed their way back into the lead with just a few minutes left on the clock.

The initiative clearly with the Harps but they stumbled badly over the run in and Teemore were to nick the final two points to regain the slenderest of leads.

The score that crept Teemore back into the lead was a precise placed kick drilled over by Eoin McManus.

Derrygonnelly did have one last gasp opportunity to salvage a draw but Jonathan McGurn came up short with his free from distance and Teemore had scored yet another championship scalp.

It would have to be said from the outset that the quality of the football served up was only moderate.

It was low-key fare more or less all the way through though there was a rising tempo of sorts as the final quarter progressed and the issue hung in the balance and there was drama in the final minutes as the game could have swung either way.

Teemore were to sprint out of the starting blocks, wing half forward John Fitzpatrick knocking over a point literally within seconds.

Paul Ward wasn’t long in responding for Derrygonnelly with a neat point but the game then sagged though sporadically through the half there were some good scores taken at both ends of the park.

Teemore might well have grabbed a goal but were denied that by an excellent stop from Harps keeper Dermot Feely, this the only real goal chance carved out over the hour.
Eoin McManus was the man entrusted with Teemore’s place kicking and he was to shoot three scores with Jason McCaffery angling over a single.

Derrygonnelly however were just about shading matters, they pulled level on three each at the start of the second quarter and went two up with good scores created and taken by Jonathan McGurn and Kevin Cassidy.

It was enough to leave them two clear for the resumption and while they were by no means commanding they looked to be in a reasonable enough position heading into the second half.

However things were to go badly awry for them over the opening six to seven minutes of the new half.

First they coughed up a slack goal, their defence sliced open and  Eoin McManus happy to slide a low shot home to the corner of the net.

Teemore were boosted by this sudden breakthrough and they continued to hold the whiphand for several minutes as Derrygonnelly struggled to absorb the blow.

Jason McCaffery hoisted Teemore further in front with two points inside two minutes and the Shamrocks had turned a deficit into a goal lead.

The game had taken an unexpected turn but Teemore were unable to sustain the charge and they went back into their shell as Derrygonnelly regrouped.

It took quite sometime however before the Harps made inroads into the deficit, a 45 struck over by Jonathan McGurn on forty three minutes the first indication that they were on their way back.

Paul Ward narrowed the gap to a single and when Barry Owens was black carded the odds of Teemore emerging from this game as winners shortened.

Kevin Cassidy who had been one of Derrygonnelly’s more prominent figures shot a point to level the sides and Paul Ward then eased the Harps back in front with a routine free.

It should have been the catalyst for a grandstand finale but instead it was Teemore who produced the finishing flourish.

Ciaran McManus almost plundered a goal, his first time shot scooping over the Derrygonnelly crossbar from close in and then on sixty minutes Eoin McManus steered over an immaculately hit distance free to put the Shamrocks in the lead.

Not just home and dry, they did have some late defending to do and they also saw McGurn’s last ditch attempt fall short.

But Teemore had done enough to earn their win.