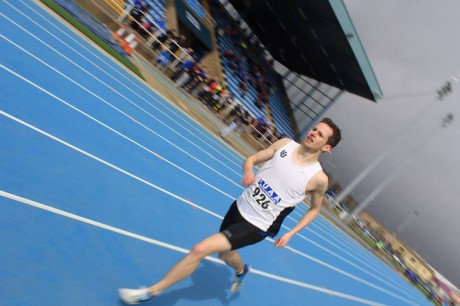 Mark was racing in the Ulster and NI Senior Track and Field Championships in Belfast at the Mary Peters track.

The athlete won the 800m, making it four out of four for Mark on the Mary Peters Track since it re-opened.

Mark cruised through his heat in a time of 1 minute 59 seconds.

“It was a really dark wet day in Belfast at the Mary Peters Track,” Mark told the Fermanagh Herald.

“After the heat I then went and got dried off and took in the advice of my nutrition guru, Nuala Lilley, and ate lots!

“I had until 5.00 pm to the final so spent most of my afternoon sleeping and getting in the zone for the final.”

He cruised the first 400 controlling the race from the gun and accelerated over the second 400m to convincingly win national gold with a comfortable margin over the rest of the field.

This win sets him up nicely in his preparations for races both in Ireland and further afield over the summer, where further medals will undoubtedly follow.

As for the final, Mark said he was ‘happy considering the slow early pace’.

Mark is to continue training with a race coming up in Belgium in three weeks. After that, he’ll be returning to compete at the Belfast International Invitational on July 2.

Helen Stockdale stepped up next to the startline in torrential rain in her debut at 5000m.

The NI 5k road race champion led from the gun doing all the hard work taking the chasing pack through to the last 600m where despite a valient chin to chin effort she was outkicked to the line by the talented under 23 Joanne Mills herself an Irish Schools track champion.

Helen described her race as tough but a brilliant experience especially as she was rewarded with a national silver medal, her second national medal of 2014 and confirms her number one ranking within her age group in the UK at both 5k road and 5000m track.