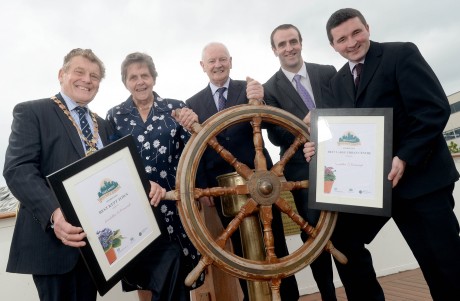 ENNISKILLEN has come out on top – and beaten stiff competition across the whole of Ireland – to emerge as the overall winner at the Ireland’s Best Kept Towns awards 2014.

Finalists in the competition included towns in Wicklow, Monaghan, Down, Clare and Kilkenny – but chairman of Fermanagh District Council Bert Johnston was on hand yesterday, Tuesday, to pick up the award.

Enniskillen also won the Best Kept Large Urban Centre category, before taking the overall accolade, the first time a town from the North has won the top prize in five years.

The finalists were drawn from the winners of the 2013 Best Kept Awards in Northern Ireland and TidyTowns in the south of Ireland.

Doreen Muskett, chairman of the Northern Ireland Amenity Council, the body that organises the Best Kept Awards, said: “It has been five years since the overall winner was awarded to a town in Northern Ireland so it is particularly lovely to see Enniskillen celebrate this terrific achievement,” she added.

And, Bert Johnston, chairman of Fermanagh District Council said: “I’d like to thank the volunteers and council members for all their efforts in maintaining our beautiful town so well, making it a nicer and more inclusive place to live.”