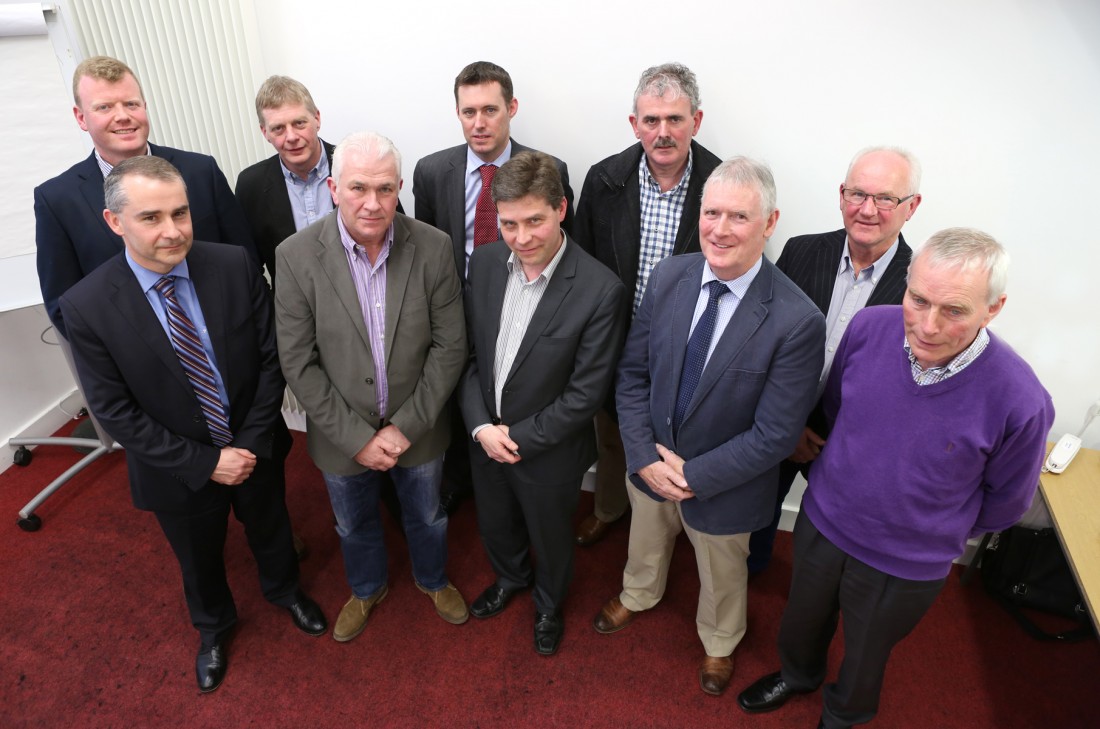 The consortium of business men who intend to purchase Aventas

A GROUP of businessmen behind the former Quinn consortium are poised to make a groundbreaking formal offer to buy the Aventas Group within ‘a matter of weeks’, it can be revealed.

During a meeting held in Enniskillen this week, members from the Quinn Business Retention Company (QBRC) spoke of their confidence in stabilising and growing the former Quinn Group and how they have received widespread backing from the group’s former customers and politicians on both sides of the border.

It was exactly three years ago this week that Sean Quinn lost control of the management when Anglo Irish Bank was appointed to take control of the business.

They have received the backing from eight former senior executives in the Quinn Group, including the former group chief executive Liam McCaffrey from Enniskillen.

Mr McCaffrey, who has been instrumental in putting the bid together, stated it was “all systems go”.
The group also revealed that they are able to treble the current Roof Tile sales, double a section of the building products as well as adding 50 percent to cement sales.

“It’s all systems go at the minute and I would be optimistic this could work,” he added.

“We are talking a matter of weeks and not months when it comes to the bid. We are very confident in what we can do and believe we can drive this business forward.

“The company (Aventas) has appointed Lazard [financial advisory firm] to deal with the disposal with any or all of the Aventas Group. They have asked for a letter to show we have the funding necessary and now we are weeks away from having that letter.”

Councillor McCartin explained said the support the group has received has been overwhelming.

“It’s about keeping business going and keeping it all in Derrylin,” he said.

“We feel that the support we have received following the announcement has been overwhelming and it gives us a great sense of confidence that we are doing is the right thing.

“I was taken aback by the amount of people I was surrounded by who was telling me this is crucial to them.”

The group explained that the proposed bidding figure has been based on their own estimations on what they consider the group to be worth.

The Aventas Group has stated they will consider any ‘credible offer on its merits’, and while they said that no formal proposal has been made, they are fully aware of the QBRC’s interests.

Paddy Mohan (former Group Sales and Marketing Director) outlined the group’s future plans: “What we have seen locally is customers who have not been buying off current management telling us they would come back if we took over.

“They (Aventas) wouldn’t be having the same success as this group could have. We could double parts of that business in a short time and win back the key customers.

“There’s excellent talent and experience and there were good ways in doing things.

“We can get that good ethos back and we can extend this business and drive and expand further afield. We have a solid footing to back up and drive this on. We would come back and turn it into something positive.

“We need to reinvigorate that and get the group back together again,” he added.