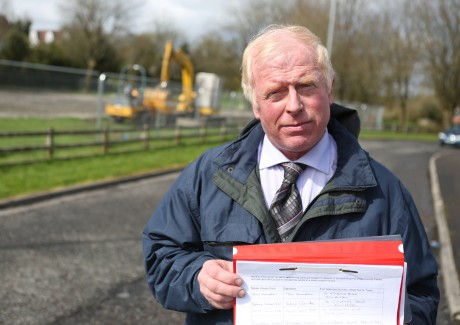 RESIDENTS from the Coleshill and Windmill Road area of Enniskillen are spearheading a campaign to prevent a community hall being erected in the area because of fears it will attract anti-social behaviour.

A petition against the community hall project has been circulating throughout Brackvede Park and Windmill Road area which has garnered some 200 signatures to date.

Many of the residents within the west Enniskillen community are elderly and they have expressed concern that the quiet area will become susceptible to a rise in petty crime.

The community project would be funded by the Neighbourhood Renewal Project if it is rubber-stamped by planning officials and Fermanagh District Council (FDC).

At the FDC’s monthly meeting, which was held on Monday, councillors were told that the economic appraisal has been completed which would be used to support an application for financial assistance to the Department for Social Development.

One UUP councillor has spoken out against plans to build the community centre close to residents’ homes.

Basil Johnston explained that the petition has attracted hundreds of signatures.

“There are signatures from that locality, from Windmill Drive to Bracvede Park, who say they don’t want the community hall,” he said.

“They live right beside the proposed site for the community centre and they feel that it would lead to the loss of their privacy and the quietness of the area and fear it may attract anti-social behaviour.

“I feel it’s wrong to force a building into that area.

“There are a lot of elderly residents who live there and they feel this community hall will change things and attract a lot of unwanted attention to the area.

“The Enniskillen Neighbourhood Renewal project have a strong desire to have this building somewhere but people in the immediate area don’t want it.

“I know the council have mentioned a time scale of funding and fear it may be lost if it is not used within that time. But they have to take into account the views of the locals. It would be wrong to hoist anything on to them that would not be welcome.

“According to the Chief Executive of FDC, residents have been taken into account as the original plans for the building was quite large and they opposed this so it was reduced in size.

“There has been an economic appraisal conducted by a consultant which has been approved at committee but I couldn’t agree because of the opposition to the proposed site.”

While the project is in it early stages, the completion of the economic appraisal will be used by the council for a funding application to the Department for Social Development and the planning approval.

Cllr Johnston suggested that an old social security building in the area could be used as an alternative.