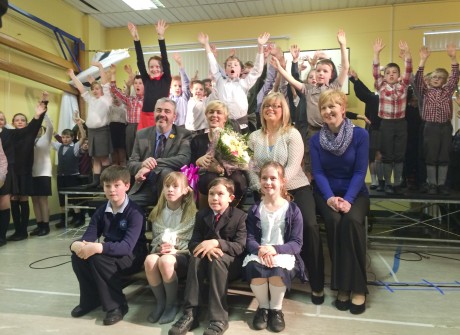 TWO forward thinking rural primary schools in Fermanagh are looking at an innovative proposal to relocate both schools to a shared campus.

St Mary’s PS, Brookeborough and Brookeborough Controlled Primary School have already received the backing of their own boards of governors to put together a proposal to merge their operations onto a single site while at the same time both schools would retain their own identities.

Dermot Finlay, principal of St Mary’s PS said the two schools have been working together for some time through the shared education programme and have a very good working relationship.

Following the Northern Ireland Executive’s ‘Together: Building a united community’ initiative the Department of Education opened a call in January for expressions of interest for shared education campuses.

At a parents’ evening held earlier this year interest was expressed in advancing a local area solution for the future educational needs of the children of Brookeborough. A community consultation followed and the response was overwhelming support to explore such an option.

“We are not amalgamating or integrating” explained Mr Finlay explaining both schools would continue to retain their own culture, and identity – and even their own uniforms.

Mr Finlay also said both schools were aware of the situation with regard to viability and sustainability of small schools and that the pupils numbers at both schools put them at risk in terms of long term viability.

Mr Finlay said those in the community would support this initiative if it meant school provision would remain in Brookeborough but the St Mary’s principal was keen to point out this is still at the exploration stage.

Mr Finlay said this was about sustaining a school in the area and providing quality education for the area, explaining the boards of governors of both schools had worked along with the Fermanagh Trust on this.

“This would cement the relationships between the two schools – sharing facilities and developing bonds while at the same time retaining their own culture, identity and ethos. This is an exciting proposal that has widespread community support into the future.”

Following receiving support from CCMS and WELB a submission has now been sent to the department of education for their consideration.

Florence Brunt, chairman of the board of governors at Brookeborough PS said: “The board are fully supportive of the idea of having a shared campus in Brookeborough. This is a way of retaining primary school provision in the village as well as improving facilities for the whole community. In recent years thanks to funding from the Fermanagh Trust the schools have been able to partake in a wide range of activities and develop even closer bonds. We are pleased to have got to this stage and hope the good work continues.”

Sinn Fein councillor Seamus Greene, who is on the board of St Mary’s PS, said it is essential for school provision to remain in the village, and said this proposal hopefully guaranteed the future of both schools.

Mr Greene said this was way forward for the community, and pointed out this was the only proposal for a shared campus in Fermanagh.