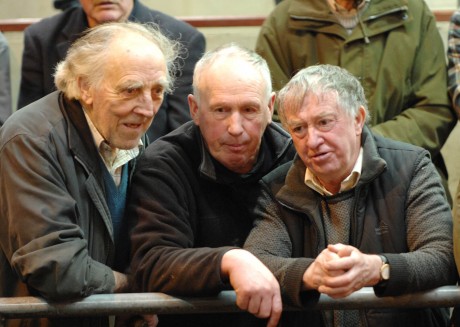 Farmers discussing the cattle on show at the Enniskillen Mart sale

TWENTY years ago this year the Ulster Farmers Mart moved from its site on the Irvinestown road to Lackaboy.

Enniskillen Mart, as it is more commonly known, is very busy at the moment with weekly sheep (Wednesday) and cattle (Thursday) sales going from strength to strength.

Last Thursday over 1000 cattle were sold at the mart, according to Stuart Johnston, who manages the mart alongside his son James and brother Terry.

The Ulster Farmers mart is 64 in business, twenty years at its current location and 44 before that  on a site where Dunnes Stores is now located. And Stuart Johnston has been involved with the mart for 55 of those 64 years.

“We are proud to promote Northern Ireland’s best beef bred cattle, which have gained a reputation for quality, drawing buyers from all over Northern Ireland and across the channel at our weekly Thursday sales.

Asked if the nature of the livestock sales had changed over the five decades he has been involved in them Stuart said things hadn’t changed dramatically in that despite modern technology animal sales are still very much about being there in person – and not purchasing over the internet or the phone.

“Farmers still want to see the animal in front of them – that’s very important. You could have two animals of the same weight but one might be worth £200 more than the other.

“Buyers will know the difference in how an animal looks so it’s very important they see the animals in the flesh” continued Stuart.

Most of the stock sold at Enniskillen mart is from Fermanagh and Tyrone but Stuart says every week animals go from the sale all over Northern Ireland and to Scotland and England.

“On a Thursday night they will be double decker lorries taking 50 plus animals to England or Scotland and animals sold in Enniskillen also end up in Derry, Down and right across the North.”

Mr Johnston also said the sale in Enniskillen is so busy as some other areas might have a scarcity of cattle which brings farmers to Fermanagh.

The move from the centre of Enniskillen to the Tempo road took place twenty years ago this year, and Stuart said they decided to move as the town was getting ‘chock-a-block’.

“We made the right move at the right time, and now have a great premises built on a green field site.”