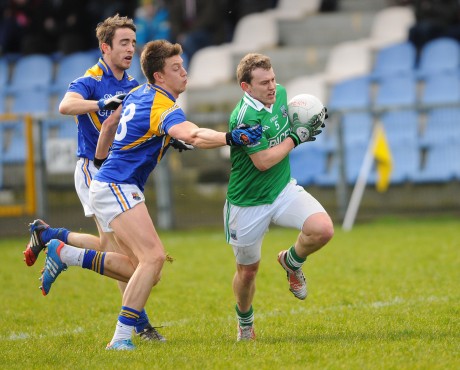 ON THE RUN… Declan McCusker

Twenty two minutes into this tie at blustery Pearse Park and Fermanagh were in cruise control.

The visiting Erne side were playing with assured purpose, working the ball smoothly through the park and the scores were flowing for them.

Five points slotted over but more importantly a two goal haul and with home side Longford  floundering, Fermanagh were apparently on their way to a key away victory.
Come the end of the contest and there had been an astonishing turnaround.

Fermanagh now the side floundering in the wake of an increasingly confident Longford who were to carve out  a remarkable one point success, a turnover of eleven points.

Just how did this game end up being turned on its head?

In the absence of anything more tangible it would seem that  for some bizarre reason the Erne side were completely unhinged by the six to seven minute stoppage in play while an injured Longford player received medical attention.

That inordinately lengthy hold up seemed to have a hugely negative effect on Fermanagh’s performance.

When play eventually resumed it was evident that Fermanagh had lost their spark and things just unravelled from there to the finish.

Longford gave themselves a sliver of hope with two quick  points, added a third some minutes later and capped it all when they  got a massive tonic with a softly conceded goal close to the break. The lead now trimmed down to a more manageable four points and it was definitely game on.

Over the second half Fermanagh struggled without any appreciable success to get their game back on track.But the spark, the fluency and potency of their early play never returned.

The injury stoppage had disrupted their rhythm while the exit of midfielder Richard O’Callaghan on twenty five minutes was another factor that had its impact.

It just became a question of attempting to hang on to a lead that was coming under severe pressure but the team had lost its way and Longford, now on a high, were thumping over the points.

The home side were to go four points clear as the end approached.

Fermanagh did make a sturdy effort to at least salvage a draw from a game which had once been firmly in their grasp, a couple of late points gathered but it was too little too late and the defeat means that it will be relegation rather than promotion which will be the concern over the remainder of the programme.

Everything went better than could be expected over those hugely promising opening twenty minutes.

The teams traded a point each before Fermanagh galloped into a convincing lead with a prolific burst of scoring.

Key to the surge was a tenth minute goal. The restored Seamus Quigley on the end of a long ball hoisted in by Ryan Jones, knocked possession down to Sean Quigley and the full forward despite being in a tight enough situation still found the net.

Sean McCormack who later in the game was to be a major figure for Longford responded with a point but Fermanagh were playing extremely well at this juncture and they streaked far out in front.

Points from Seamus and Sean Quigley the former with a trademark shot from a difficult angle far out had the team five clear and then it got even better with a second goal.

Another fluent attack was ended in a foul on midfielder O’Callaghan and Seamus Quigley stroked the penalty to the bottom corner of the net.

Possession won from the subsequent kick out and Paul McCusker drove over a score and with Longford simply not at the races, Seamus Quigley added another from play.

A scoreline of 2-5 to 0-2 and that really should have been that but then came the stoppage and when play resumed Fermanagh were a shadow of the snappy outfit they had been.

Longford picked off a trio of points and then poached a critical goal.

Mark Hughes lobbed in a punt to the goalmouth, Fermanagh didn’t defend robustly enough and full forward Brian Kavanagh got the flick on.

A point from Sean McCormack and six points had been wiped out though Fermanagh did have a response at the end of the half, Sean Quigley steering over his third placed kick.

Still a good enough position for Fermanagh and when they restarted the second half with Sean and Seamus Quigley combining for the latter to hoist over a well taken score the storm seemed to have been weathered.

Not the case unfortunately.

For the next twenty minutes plus, it was rejuvenated Longford who dictated and an increasingly flat Fermanagh couldn’t stall the tide of Longford scores.

Three points in six minutes set the tone before Sean Quigley gave a momentary respite with an answering score but it was backs to the wall stuff now for beleaguered Fermanagh.

It became something of a Sean McCormack show as the Longford corner forward proved immaculate with his shot taking. Four points from him and a single each from Paul McKeon and Pauric Gill and with some of the scores coming from testing distances it was a case of anything Longford now attempted came off.

The rampant home side went in front for the first time on fifty five minutes and when Paul McKeon landed a free from the sideline it was all too clear that Fermanagh were not going to arrest this sensational recovery.

McKeon’s score put the home side four clear but they weren’t to have a totally carefree run in to the finish.

Fermanagh may have been shellshocked by what had happened to them but they had the drive and commitment to make a last ditch attempt to salvage at least something.

They put in a late sturdy assault which yielded points from Seamus and Sean Quigley and Brian Cox  made it a one point game but time ran out and the Erne side were left to ponder just how they had allowed this game to slide away from them.