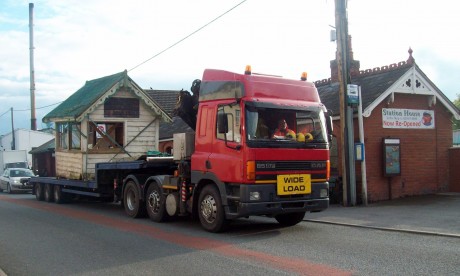 HISTORIC… The Railway Cabin which was unearthed in Ballinamallard

AN HISTORICAL RAILWAY CABIN that once played an integral role in the local rail network is to be restored after lying  in a Ballinamallard orchard for nearly 60 years.

The signal cabin was once used to control the north end of Bundoran Junction in Kilskeery, formerly a major junction for the Great Northern Railway (GNR), where trains diverged to travel to places such as Irvinestown, Enniskillen and Kesh.

Up until last week the cabin had been used as a summer house , but Selwyn Johnston of Headhunters Railway Museum, who have been instrumental in the project explained that former GNR employees Vincent Beattie and Kevin Love knew it had been moved to Ballinamallard after the railway closed in 1957.

They discovered it back in 2000, but it wasn’t until Downpatrick and County Down Railway (DCDR) expressed an interest in restoring the cabin and secured a grant of nearly £10,000 from the Heritage Lottery Fund that the wheels were put in motion. The project will restore the former cabin and create a mechanical signalling demonstration to add to the existing attractions in Downpatrick.

Selwyn expressed his pleasure at the recent developments.

“Headhunters Railway Museum together with former railway employees and local enthusiasts are absolutely delighted to have been involved with this project and would like to particularly thank the Fisher family in Ballinamallard, whose property the signal cabin resided, for kindly making arrangements to have it donated to the Downpatrick and County Down Railway for future preservation.

“For us it preserves one of only two remaining signal cabins from the Great Northern Railway’s Bundoran Branch Line, the other located at Irvinestown Railway Station. Such railway buildings are historically important, but unfortunately due to their wooden structure and exposure to the elements few have survived.

“We are so fortunate that an opportunity has been provided to have the cabin restored and preserved at Downpatrick as its condition was deteriorating extremely quickly, reflected by the fact that the two other signal cabins at Bundoran Junction had collapsed several years ago.

Local train advocate and Ballinamallard DUP councillor Bert Johnston echoed the sentiments of Mr Johnston, but expressed some regret that the cabin was not staying in Fermanagh.

“It would be nice to have it as I think it belongs to Fermanagh not Downpatrick. With the boundaries I’m not even sure if it is in Tyrone and apart from that with the local government changes it is in the district of the new Fermanagh Omagh council. I would have loved to have seen it here.”

Restoration work on the signal cabin is expected to take at least one year and an official opening is planned to invite all those who have memories of its former life in Tyrone and Fermanagh.