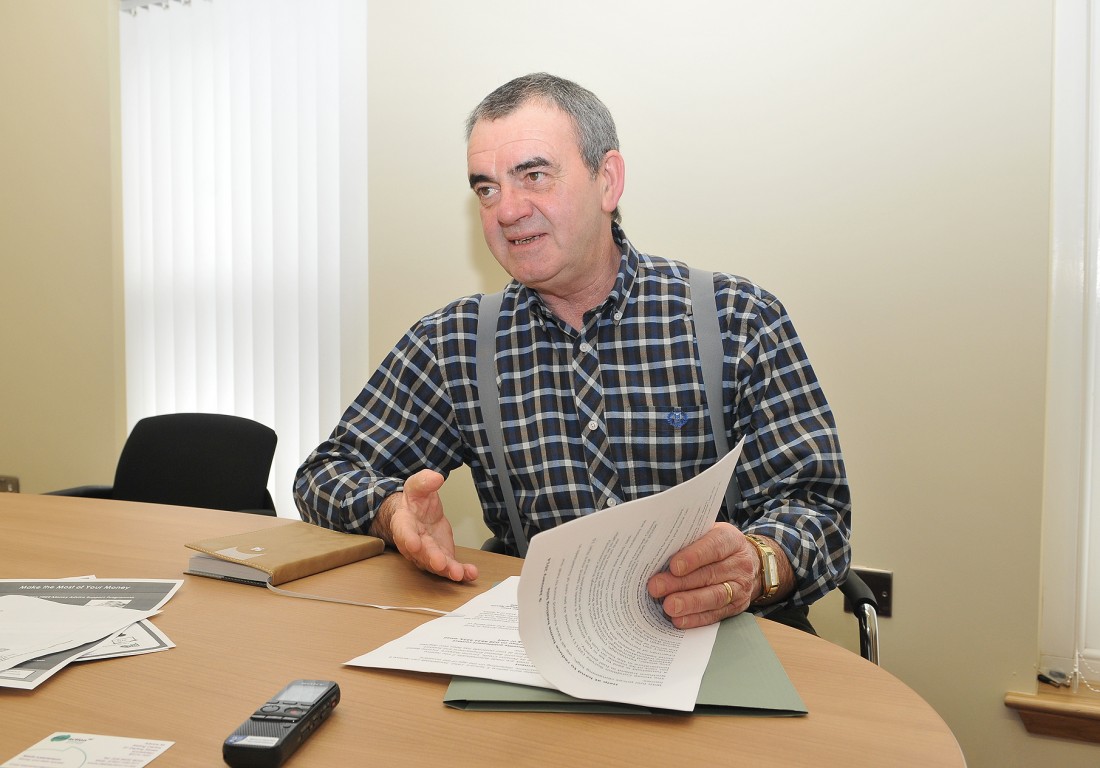 MORE and more people here are struggling to cope with crippling debt – and with a  major restructuring of welfare benefits on the cards, the situation looks likely to get worse.

Kevin Lawrenson, money and debt advisor for Debt Advice NI explained that within the past four months he has dealt with £2.3m from 396 debts and from August 2012 through to July 2013 he has been faced with £4.5m debt from 707 debts.

It is Christmas though which places the greatest strain on families he explained.

“I was back to work on January 6 and have been consistently seeing five people a day. By the end of January I will have 28 new cases, in addition to my constant repeat clients.

“In total I am dealing with 249 clients in Fermanagh.

“A lot of the debt problems are created because of change of circumstances. Sickness, marriage break-up and unfortunately unemployment.

“The other thing is when you think about it from mid November many get themselves part-time jobs for Christmas and now Christmas is over they are left without money.

“So what you have is people who were down, they’re then boosted because they have got this money coming in, but because we’re all the same at Christmas that money is not looked at for January, February, March, that money is for now and they face debt problems.

“It’s just the nature of the animal. How can you say to somebody ‘no’. It’s not in the parents’ psyche.

“And this is why the people in the present moment are being bombarded by these pay day loan companies.

“Fuel poverty is another big thing. Now people will say we have got it mild this year, but I always say from November to even February we see the increase in the problems with fuel costs.

“You can’t say to anyone don’t turn your light on, don’t do this, it’s not feasible. You use more because Christmas and people have family at home.

“It’s a time that commentators will say ‘budget for this’ ‘budget for that’, but at Christmas you can’t because it’s not in the psyche.”

Dealing directly with those affected by debt Kevin has seen first hand the damage it can cause both mentally and physically, and in some cases, tragically, there appears to be a direct connection between finanical worries and suicide.

“Obviously the depression is one. At 9 o’clock this morning I spoke to someone who was taking a certain path to get rid of their debt who said they now feel warm, having felt a shiver for the past 17 months.

“It is deeply traumatic for those dealing with debt I have had clients who committed suicide so debt can lead to this course of action, but let’s have a look at the difficulties these people had and let’s try and help relieve it.

“Without a newspaper highlighting this it will always be what I call ‘lifted out off the floor now and again’.

“If it was there constantly more people would be aware of it.

“Debt is attributed to a lot of people unfortunately suffering from depression, real acute anxiety and unfortunately can even lead to someone taking their own life which is very sad.”

According to Kevin women generally make up the majority of the clients he sees, but he explained that debt covers all demographics from the ages of 17 to 80.

“The vast majority of people I see are female. “There are many single parents who are struggling every day which of course ties in with marriage break-up.

“Family break-up over the past number of years has risen and it is because of these financial pressures resulting in the family systems crumbling.

“I know that we can’t equate it to plagues in the third world, but it cuts through like an arrow.”

Advice to those looking to borrow money

“I always say that if in the future you have to do it, look where you’re going to borrow money. Look local first, so that would mean credit union or a bank. Look local because you can access information very quick about yourself, you can put your point across very quick about yourself, without going online.
When it comes to online it’s like anything else – you’re not dealing with the same person. Jack and Jill, Bob and Harry it doesn’t matter and as much as you would like to inform them about your difficulties are they sympathetic to them? Whereas if you see someone face to face that might be different.”

To learn how to make the most of your money you can attend Advice NI’s free money advice support programme being run throughout February in the Aisling Centre, 37 Darling Street, Enniskillen.

The programme offers advice on:

• Budgeting and maximising income
• Borrowing money and good/bad credit
• Coping with money problems
• Raising the issue of debt in the home.

The programmes will be held on Tuesdays throughout February on the 4th, 11th, 18th and 25th, running from 6.30pm to 8.30pm. For urgent debt concerns contact Kevin Lawrenson on 66329045 or call into the office.