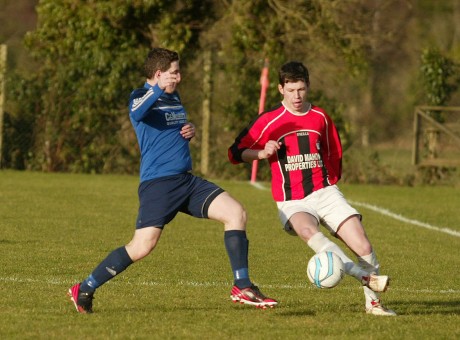 A Kesh defender turns the ball away from goal

This was the undoubted game of the day in division three and it certainly lived up to expectations as league leaders NFC Kesh shaded a seven goal thriller at home to third place Strule United.

The home side broke the deadlock after twenty minutes when Mark Jones played the ball through to Stephen Simms who did the rest with an assured finish.

The same duo struck again on the half hour mark and at that stage NFC Kesh looked to be in complete control. Strule United though weren’t going to lie down and Tommy Flanagan had a shot saved by Andrew Nevin while he was also unlucky to see an effort come back off the crossbar.

Tommy Murphy pulled a goal back with a scrambled effort just before the break to leave it 2-1 at the break.

Just before the hour mark the visitors had a great chance to level matters but Flanagan failed to score from only a couple of yards out.

The home side then went two goals in front again when good work from Mark Jones down the left wing saw him send in a cross which Niall McMenamin headed in from close range at the back post. Strule United though were still very much in the game and substitute Kuba Klobusek teed up Murphy who pulled a goal back.

Jude Campbell for Strule United was then denied by Nevin as the visitors pushed for an equaliser.

The home side then went on the counter attack and Jones collected the ball inside his own half and went past two defenders before finishing with a brilliant shot for a superb individual goal.

Kevin McAleer then had a shot saved for before Murphy completed his hat trick with what proved to be the last attack of the afternoon.