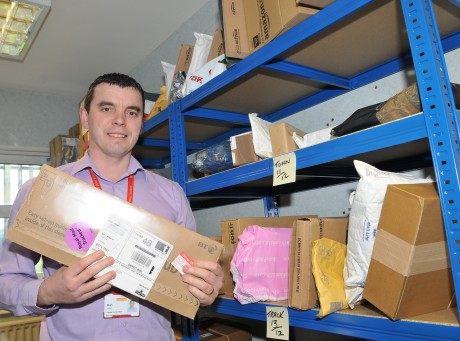 THINGS ARE hotting up at the Enniskillen sorting office – and staff there expect half a million items to pass through their doors during the two week Christmas period.

Packages are accounting for close to 5,000 items a day, while the humble Christmas card continues on its decline.

Mark Cullen, delivery office manager spoke to the Herald this week, and is among 60 postmen and women who work with Royal Mail in Enniskillen covering Belleek to Irvinestown, as well as the town itself.

Some 55, 000 items of Christmas mail are being handled by staff per day, with parcels taking up a bigger chunk of that than ever.

“Ordinarily  package wise we would have maybe 2,200, and we’re now more than double that a day,” Mark explained, “The containers that we would receive in the morning would have as many as 15 in a normal morning, on a fairly heavy day, but at the minute we’re receiving thirty and we have been since probably the start of December. But it’s crept up from mid-November.”

And, Christmas cards have continued in their decline.

“Letter-wise it has fallen away slightly, but the parcels have made up for that. Over the last three or four years, especially with emails, Facebook, text messages, the amount of Christmas cards have decreased, and I’d expect that trend to continue,” Mark explained.

“We’re just as busy, but it’s a different sort of scenario. Years ago you had 10-15 Christmas cards going into houses, now it’d be six or seven, but the parcels have made up for that.”

Three vehicles have been added to the sorting office’s normal fleet of 30, and Friday (December 20) is expected to be the busiest day of the year, with staff expected to deal with close to 60, 000 items.

The cut-off dates for postage, as recommended by Royal Mail, are for first class mail, Friday December and today, Wednesday December 18, for second class to ensure delivery in time for Christmas. Important items can be posted using Special Delivery up until December 23.