Advertisement
HomeHeadlineBenefit cuts ‘could cause serious hardship for elderly’
Advertisement 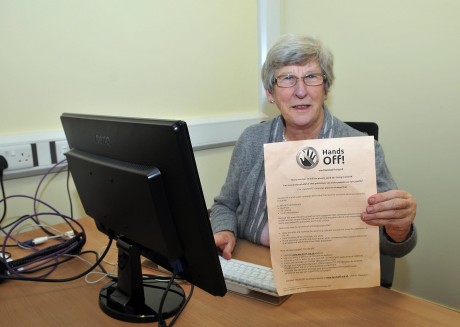 CUTS TO benefits for the elderly could cause serious hardship for many in our community, according to a local spokesman for the Age Sector Platform.

Patricia Donald, from Enniskillen, spoke this week about potential cuts to universal pensioner benefits that could have a real impact locally.

And she wants to see the subject raised at the House of Commons, which could come about through the signing of an online petition.

100, 000 signatures are sought for the ‘Hands Off!’ appeal, with cuts to winter fuel payment, bus passes, TV licence, and free prescriptions.

“They are all under discussion at the moment and with the 2015 election coming up, we want to get this discussed  in the  house of commons so that it won’t be taken away from older people,” explained Patricia.

“The winter fuel is so important because of fuel poverty particularly prevalent among the elderly, and last year deaths went up as a result of it. The free television licenses are wonderful for people who are maybe immobile, and in the house.

The bus pass is great for older people who are able to go out and about but perhaps wouldn’t feel like driving to Belfast, and they can visit people.”

And, Patricia encouraged people to sign the petition online at www.handsoff.org.uk.

“The response from people is, when we hold the pensioner’s parliament, fuel poverty and food prices were top of the list and this will be very important. The point is, it needs to be voted on electronically – we need 100, 000 hits by May of next year. Anyone can go online and sign it.

“We want it discussed because it will be very much an electoral issue,” she added.