A BELNALECK man whose father was killed in the Enniskillen bomb suffered a 48 hour tirade of abuse on social networking site Twitter, which included taunts that his father ‘deserved to die’.

On Wednesday past Stephen Gault was subjected to the abuse on the site by dissident republican supporters who branded him a ‘poppy-wearing parasite’ amongst other sectarian slurs. From 6pm on Wednesday through to Friday evening the abusive comments were made.

Speaking to the Herald, Stephen Gault explained that despite being the victim of ‘vile’ comments his Twitter account has been suspended, leaving him ‘frustrated’.

“The people doing the tweets have blocked me so many times in a certain period of time my account has been suspended.

“Some of them were very vile, very ignorant and many of them were about my father. Things like my father wasn’t murdered, he died in a war and was killed by a soldier. They called me pathetic, told me to dry my eyes and said ‘you’re a bigot’.

“They also called me a poppy-wearing parasite, vermin and other things, there were a lot of sectarian and bigoted comments.

“They referred to me as a ‘sectarian bigot’ and when my account was suspended they were saying we got rid of him, we got rid of ‘the hate preacher’, which they have called me.”

Stephen did not respond to the comments made, but many took it upon themselves on his behalf to condemn the negative comments being made.

“At the time I felt very much intimidated and hurt, but I got a lift when genuine people, including Roman Catholics, were saying this is out of order.”

He was also supported by former Victim’s Commissioner Patricia McBride and UTV’s Paul Clark, who both condemned the comments, with McBride saying she was ‘disgusted’ by the way the minority we’re treating him.

“As Patricia said there are a lot of genuine people and this is a small minority, but they are very dangerous people. The small minority can be hurtful and they are the type of people you don’t want to cross.

“It most definitely put a downer on this weekend, but the support I received from people, many of whom  I didn’t even know was very reassuring.”

While deeply hurt by the comments made towards him Stephen conceded there is little that can be done.

“The repercussions would be extreme, these guys are complete out and out dissident supporters. They may only be a minority, but at the same time this shouldn’t have happened.” 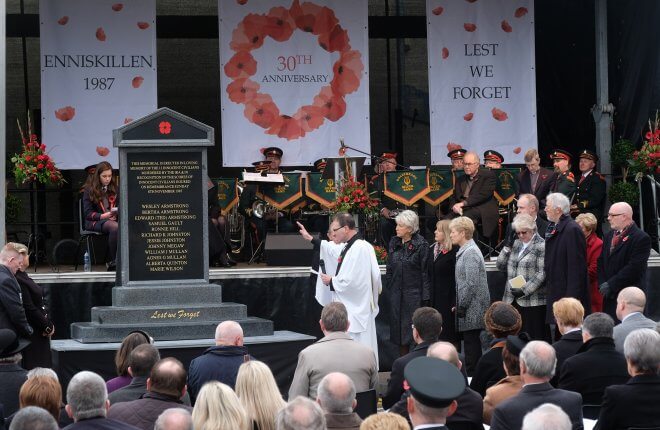 ‘They have destroyed my faith in my fellow townspeople’

Monsignor Peter O'Reilly has said the Trust is open to other proposals however an appeal has since been made...

The Clogher Diocesan Administrator was speaking amid ongoing discussions over the placement of the bomb memorial.