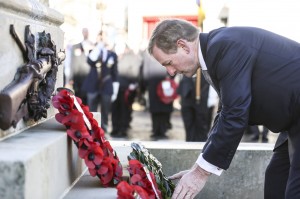 AN TAOISEACH Enda Kenny, was among delegates at the Cenotaph in Enniskillen, as crowds gathered to pay respects to those who had died during both world wars on Sunday.

Several hundred people attended the Enniskillen memorial service, while similar events were held at other locations throughout the Fermanagh area, including Fivemiletown, Irvinestown and Brookeborough.

For the town, it was 26 years since an IRA bomb exploded, killing 11 who had gathered to pay their respects to their war dead.

The Taoiseach laid a wreath at the cenotaph, as did relatives of the victims of the bombing, Secretary of State Theresa Villiers and  local MLAs, Arlene Foster and Tom Elliott.

Speaking on meeting relatives of those who died during the Enniskillen bombing in 1987, Mr Kenny said: “It was something that made an impact on me when I came here. I think it was appreciated by the groups that I met.”

He added that the continuing impact of events like that in Enniskillen, showed a need to deal with ‘consequences of the past’, and the ‘need for reconciliation’.

“It says we should continue to work together to bring a sense of understanding and justice to those victims of the atrocious bomb in Enniskillen and in a broader sense to define what it means for the victims of terrorism right across the board.”