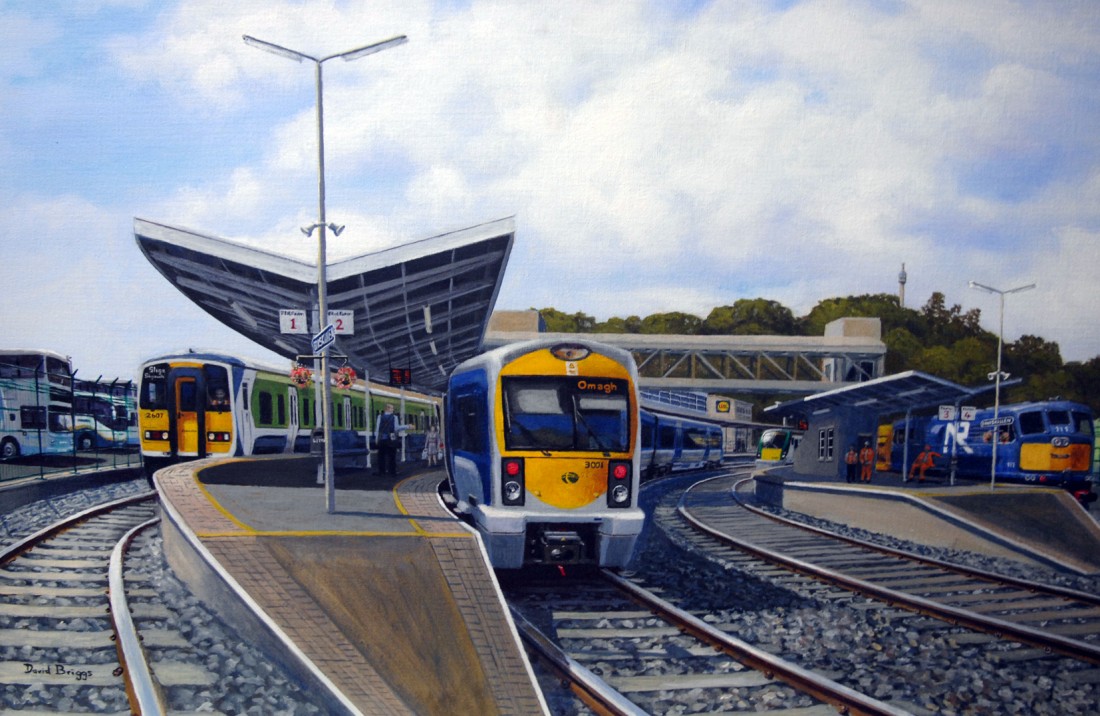 A VIEW INTO THE FUTURE? An artist’s impression by David Briggs of what Enniskillen station would look like if the railway was still in place today

A LOBBY group that is pushing for a return of the railways to Fermanagh and Donegal have called on governments and politicians to support the initiative.

The estimated cost – £638m to reconnect the Enniskillen to Portadown link and on to Belfast and Dublin – would seem prohibitive but, according to Enniskillen-born railway historian, Alan Devers, if the political will is there, the scheme is do-able.

He was unable to attend the meeting in Enniskillen organised by the West Ulster Rail Initiative in Enniskillen, but elected representatives from north and south were present.

It was held to decide effective ways of securing Ireland’s share of equal funding from the EU’s various rail inter-connection programmes.

The Chairman, Canon David Crooks, who is based in Donegal, was scathing at the lack of support from politicians.
“We are here to send a clear message to them that the North West of Ireland is no longer content to be treated as less than a third world region.”

He went on: “There is absolutely no conflict between the rail objectives of our group and the equally urgent objectives of those thousands of citizens committed to addressing the disgraceful neglect of the national roads system here.

“We simply demand parity of connectivity with our sister regions around Belfast and Newry, Dublin, and Sligo. We do not expect any special treatment, just simple equality“.

Donegal MEP, Marian Harkin said all of her fellows MEPs, north and south, were united in fighting to secure EU funds for specified capital projects, but it was no easy task.

She added: “We call for the establishment of an intergovernmental agency whose sole remit will be the implementation of the inter-connection promises – road, rail and all utilities – of the Peace Agreements.”

He commented: “It was amazing how many guests to the G8 summit inquired which train they could take from Belfast to Enniskillen, and how astonished they were when they were told there wasn’t any”.

Meanwhile, Alan Devers insisted that it all rested on political will.

“Don’t forget they were going to ahead with the A4 route from Ballygawley to Enniskillen which was going to cost £400m.

“It eventually fell by the way, but they often fund large infrastructure projects like that.”