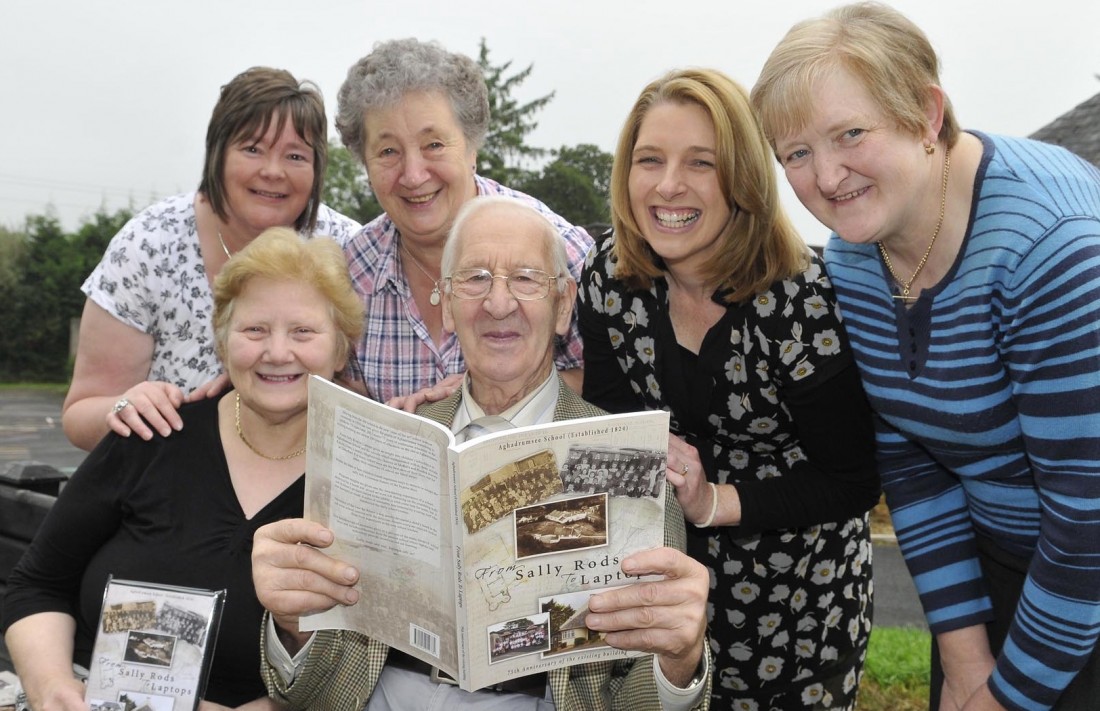 Florence Pryce, second right back row, principal of Aghadrumsee Primary School, pictured with some of those involved with the production of the DVD and Book entitled “From Sally Rods to Laptops” outling the history of the school. Included are, front, Ivy Ritchie and Derek Murray. Back, Esther Forster, Hazel Doonan and Florence Egerton

On Saturday 29th June 2013 Aghadrumsee Primary School celebrated 75 years of continuous education in its existing building with much success.

Over 500 people from near and far enjoyed the special event. Back in 1938 there had been no formal ceremony to mark the building’s launch and so it was decided to hold the long overdue celebrations this year.

Not only is Aghadrumsee School one of the oldest buildings serving its enrolment but, having been established in 1824 by the Kildare Place Society, means it is one of the oldest schools in the province of Ulster still functioning on the same site.

Schools which have closed and merged with Aghadrumsee Primary School included Doon, Lisroon, Rateen, Rosslea known as Tattenbar and Magheraveely known as Midhill; in all the celebrations, the identity of these fine institutions was recognised and their history in relation to Aghadrumsee.

On the special day, celebrations began with an outstanding performance of Drama and Music by the pupils of Aghadrumsee Primary which showcased the past eight decades of history and gave a flavour of the eras through which the school has existed.

This was then followed by the launch of the book titled ‘From Sally Rods to Laptops’ which was complied by the local community to mark this occasion.

There were also designated exhibition areas for the schools of Rateen, Doon, Lisroon, Magheraveely and Rosslea.
After the formal part of the day while past pupils met up with old pals, children engaged in a feast of family fun and entertainment, this included bouncy castles, balloon makers, a silver band, Ulster Scots Dancing, the Mummers and many more activities.

Copies of the book ‘From Sally Rods to Laptops’ are available for £15 and a DVD of the special day is now attainable for £10.
Anyone wishing to purchase a book or a DVD please contact the school on 02867751285.