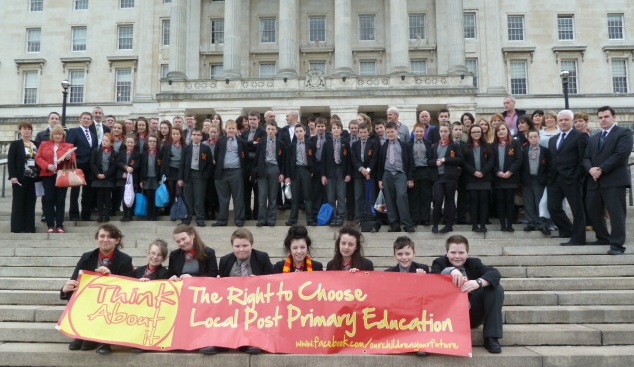 THE UNDER THREAT St Mary’s High School, Brollagh, has received a resounding vote of confidence with 44 MLAs backing the retention of the school and 2,500 letters of  support written as part of their most recent consultation with the Council for Catholic Maintained Schools (CCMS).

The consultation process with CCMS and the governors, staff, parents and pupils at the school closed yesterday and vice-chair of the North West Education Action Group Francis Maguire explained that the massive response from the local community was a further boost to hopes of retaining education in West Fermanagh.

“Such a response says to CCMS we want this school to remain open and that figure doesn’t even count letters sent through e-mail. When you look at the initial response to the consultation we had around 1,200 letters so we have doubled that and more.”

Last week representatives from the school took their fight to Stormont and as Mr Maguire explained it was a worthwhile trip.

“On the back of the Stormont trip we gained over 44 signatures from cross-party MLAs stating their support for the retention of education at St Mary’s and opposition to the closure of the school.

The action group has been busy and yesterday they met with the local bishop and Gerry Lundy, the CCMS deputy chief executive.

“The group are hopeful that CCMS and the department of Education will agree on the group’s proposed pilot model of education and in the short term they hope CCMS will withdraw their recommendation that the school should close.

“This is doing us harm and we’re hoping for a pause to be put on that. From the vibes we’re getting  though if the Minister says the department are looking at exploring the options we have proposed CCMS will hit the pause button.”

From information the group have received this move could conceivably be taken within four to six weeks.

“We’re now sitting back,” explained Francis. “We’re waiting on the move from the Minister and CCMS.

“We’re very confident and very hopeful we can see this through. Certainly doors we have tried to open in the past few weeks have opened in our favour and we will continue to strive to see through its implementation.”