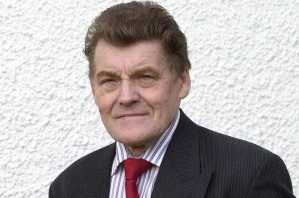 LOCAL DUP councillor Bert Johnston refuses to give up the fight for a dual carriageway on the A4 Enniskillen to Ballygawley Road and the return of the railways to Fermanagh.

Council Johnston, pictured above, has long been a champion of the railways returning to the county and remembered when they were closed in 1958. He also recalls being promised a motorway to Enniskillen, which 55 years on, is yet to be fulfilled.

“We were promised a motorway, yet we are now only looking for a dual carriageway. It has been 56 years and we’re still no further forward.”

Mr Johnston asked last week’s meeting of Fermanagh District Council when work might start on a new railway and he said there was no indication that Fermanagh was any closer to getting a dual carriageway that stretched as far as Belcoo.

The councillor proposed writing to Department for Regional Development (DRD) Minister Danny Kennedy for the reinstatement of the railway. This was seconded by party colleague Alison Brimstone and agreed by fellow councillors.