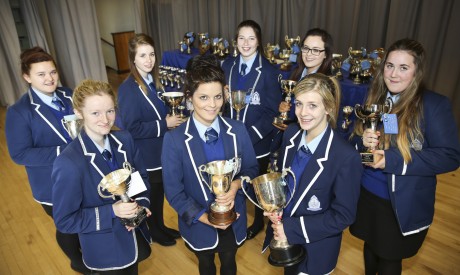 AT THE annual prize-night in St Comhghall’s, Lisnaskea, principal Gary Kelly paid tribute to staff and pupils reflecting on a good year for the school.

Mr Kelly described the results achieved by pupils at GCSE and A-Level as ‘very encouraging’.

chieving 7 or more good GCSEs or better at Grades A* – C which are both significantly well above the average for secondary schools in Northern Ireland.”

Speaking in front of parents, pupils, the board of governors, and Canon Joseph Mullin, Mr Kelly also noted the successes of school leavers, including successes that are new in the school’s 43-year history.

“This year for the first time in the 43 year history of St Comhghall’s College, two students from the college are going to Queen’s to study law (3 As), we have also for the first time boys going on to study architecture, we have students also going to university to study to become audiologist, opticians, occupational therapist, nurses, engineers, radiologist and many other courses in university and this wide range shows the real breadth of opportunity here at St Comhghall’s College for our ‘A’ level students and we wish all of our Year 14 leavers well in the future whether it be at university, in training or in employment and we congratulate them all on their achievements.”

Mr Kelly also spoke of the extra, and para-curricular work that takes place in the school.

He said: “I want to put of record my appreciation of those teachers who build self worth into our pupils, who develop self confidence, self discipline, team loyalty and reliability as foundational values, always at their own expense in terms of time and comfort.

“Well done and hard luck to the boys U16 GAA Team who again reached the Fermanagh GAA final in Brewster Park to be unfortunately beaten by St. Joseph’s.

“To Sophie O’Connor and Caitlin Murphy who reached the final of the NI STEM competition and ambassadors award in Belfast, led by Mrs Rogers.”

Mr Kelly also referred to the upcoming school production of ‘The Wizard of Oz’.

“This year Mrs McAleer, Mrs Quinn and Miss O’ Connor are putting on the fantastic Andrew Lloyd Webber production of the Wizard of Oz this December.”

Concluding, he said: “I must also pay tribute to all of the staff, both teaching and non-teaching, who once again have worked tirelessly to ensure that every pupil has the opportunity to achieve success and whose dedication to the students is outstanding.”