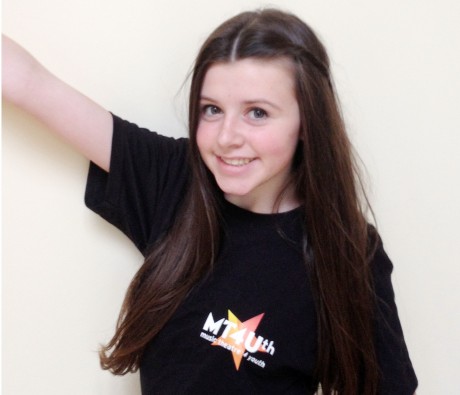 Auditions for the show were held back in early June. And Sophie, pictured, was one of twenty three in the 10 – 14 age group to make it through.

“It was so scary at the start but by the end it all came together,” explained Sophie.

After a demanding and exhausting rehearsal process the show played over the bank holiday weekend in Titanic quarter, the venue for the production was Belfast’s T13.

Sophie had previously acted as a member of Fagin’s Gang in Enniskillen Light Operatic’s highly successful production of Oliver! in 2011.

“Fame! has been an amazing experience for many reasons, such as I got to meet so many new people who I know I will know be friends will for a long time,” Sophie continued.

“I also loved being on a professional set, with a professional cast. I loved learning new dances for the songs as it wasn’t really easy and gave me something to work towards.

“The challenge of having only a week to put on a production was sometimes stressful and hard as I had to learn dances and words of songs of quite quickly, but it definitely paid off in the end.”