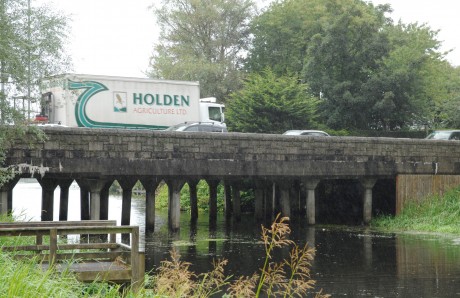 The Johnston Bridge in Enniskillen

After rumours had circulated regarding the safety of  the Johnston’s bridge in Enniskillen, the Department for Regional Development have been quick to quell any concerns regarding the structures on one of the town’s  main arterial routes

The bridges, which link the centre of Enniskillen and Cornagrade, as well as being a main traffic route to the South West Acute Hospital were officially opened on November 15 1954.

Prior to the building of this bridge, access from the island of Enniskillen to the workhouse located at the old Erne Hospital was by rowing boat or meant a long walk past Forthill.

The bridge was named after the Mayor of Enniskillen – William Johnston.

Reports had come to the Herald’s attention regarding a failed European safety test on the bridge, but the Department of Regional Development have released a statement which indicates there are no urgent concerns and indeed no knowledge of any European test of any kind conducted recently.

A Department for Regional Development spokesman said: “The Johnston bridges are over 50 years old and just like roads, require continued maintenance, however, we have no reason to be concerned about their structural safety or load carrying capacity at present.

“We conduct regular maintenance inspections on all bridges in the Fermanagh area.

“While no work is programmed in the current financial year for these bridges, they are scheduled for major maintenance at some point in the next few years to ensure that they continue to be fit for purpose.

The two bridges form an important part of the road network in Enniskillen and any maintenance will be carefully planned.”

If any structural problems or safety concerns were to emerge from the bridge, any road works could create serious problems for traffic in the Cornagrade area of Enniskillen.