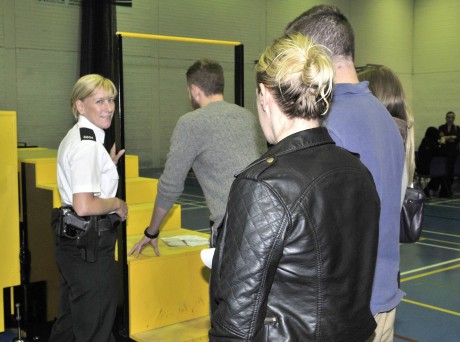 A special familiarisation day was held in the Lakeland Forum last Thursday with sessions running on the hour from 9.30am to 4.30pm. Hundreds attended the event, with interest in Fermanagh high for the 100 positions on offer across the North.

It is almost three and a half years since the last recruitment campaign and the expectation is that the initial 100 appointments will be made in the financial year April 1 2013 – March 31 2014.  Arrangements are currently being put in place to maximise police recruitment up to 378 additional officers within 2014/15, if and when additional funds are made available.

Local Sinn Fein councillor and member of the Fermanagh Policing and Community Safety Partnership, Stephen Huggett, has welcomed the balance in police membership.

“Everyone engaged in the partnership wants to see policing done properly. If we need to replace  those who are retiring we want a good balance of people joining the police. There is nothing else for it.

“It is not something we would discuss, but we certainly would encourage people to apply.”
“Obviously when people are looking at future  careers it is an option and good luck to people who decide to take it.”
When asked if he felt the jobs could go some way to curbing the problem of emigration from the county,  Cllr Huggett questioned whether these few jobs were enough.

“Is it a solution? I don’t think it is, there are not that many jobs. You look at the amount of people that have left in recent years and it wouldn’t touch it. Yes the few jobs may encourage a few not to emigrate and some might join the police, but it’s nothing to shout about.”

Fellow party member and member of the Policing and Community Safety Partnership Thomas Maguire said that any move that brings the police closer to 50/50 membership was to be encouraged.

“Obviously we were as a  party disappointed when the 50/50 target was cancelled. It was a target set out by the Patton report and was something we hoped would be achieved.

“They have now decided to do some recruitment due to retirements and need more staff. 50/ 50 policing was what we signed up for in the Patton report and Good Friday Agreement and anything that brings us closer to our ultimate target would be encouraged.”

When asked whether he felt these new Fermanagh jobs would make any dent in the growing emigration problem, Cllr Maguire said that any jobs ‘regardless of where they come from’, that ease the brain drain of our young skilled people is to be welcomed.

“Our young people are vital to creating a prosperous island,” he added.

Speaking about the recruitment process, Chief Superintendent Pauline Shields, District Commander added: “This is a wonderful opportunity for the people within the local Dungannon, Cookstown, Omagh and Fermanagh area to get involved in policing.

“Becoming a police officer is a challenging career, but it is not just a job, it is a vocation.”

Fermanagh finally gets hooked up to gas network

Group’s aim is to combat loneliness

Busker blown away by special invitation

Dogs are seized by police in badger baiting crackdown