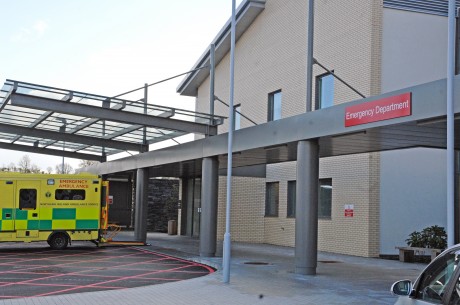 The A and E department of the South West Acute Hospital

A TEENAGER from Enniskillen has been given a five month custodial sentence after an incident at a local hospital left a nurse fearing for her safety.

It emerged during court that at the time McBarron was on bail for a previous charge of disorderly behaviour which he was appealing.

After the concerned police officers took the defendant to the accident and emergency department of the hospital, McBarron started to become agitated.

McBarron became so agitated and restless that a nurse who was looking after him called for the police officers to take him away because she was in fear of him.

A defence solicitor for the public prosecution service outlined to the court that the police officers who found McBarron were concerned over his state and decided to take him to A & E in the South West Acute Hospital.

The accused agreed to go with the officers but on the journey to the hospital he became agitated.

Upon arrival McBarron was taken to a room where a police officer and a nurse attempted to calm him down however his behaviour became so bad that a nurse had to ask the officers to take him away.

The officer charged him with disorderly behaviour and as the nurse and officer attempted to help the accused told them: “You’re all the same.”

The defendant then went on to say that he “disagreed with what I have been charged with” and alleged that he was victimised in the back of the car.

Defence solicitor Garry Smyth asked the judge to give the defendant credit for his early guilty plea.

Mr Smith added: “He has accepted responsibility for his actions. He had been drunk earlier in the evening but wasn’t causing any trouble to anyone just harm to himself more than anything.

“That’s how he ended up in A & E. When he was outside in the car there appears to have been some sort of period of unrest and something happened that made him feel he wasn’t treated right.

“That mindset carried through to the hospital but there was no direct threat to staff.

“He apologises for his behaviour and understands that he has made it difficult for hospital staff.

McBarron appeared in the dock to stand accused of the charge of disorderly behaviour. It’s the second time McBarron has appeared before the court charged with the offence.

District Judge Nigel Broderick said: “Your solicitor has said all that can be possibly said. It’s a difficult case to deal with as there are aggravating features.

“When the nurse was trying to help you and provide you with assistance she was in fear of you and asked the police to take you away.

“You have a previous record and this offence activates an immediate custodial sentence.”

McBarron was ordered to serve a five month custodial sentence for the offence.