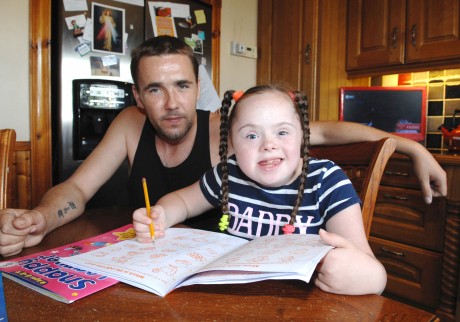 THE distraught parents of a disabled child have spoken of the devastating moment their daughter broke down in tears when she was told she has no school to go to next month.

12-year-old Bridgit Dunne, who suffers from Down Syndrome, is facing her fourth month without a school education which her family say has left her badly affected.

Bridgit’s parents Christopher and Jacqueline wanted her to attend a school closer to their home in Irvinestown and contacted the WELB (Western Education and Library Board) in May to have her moved to St Mary’s College in the town.

However, they believe a lack of communication between the Department of Education and the WELB  has meant their daughter has not secured a place at the local school and will miss out on the first month of term.

Mr Dunne said the lack of schools able to cater for disabled children in their local area has badly affected his daughter.

“If Bridgit is kept away from school for much longer her behaviour and mind will keep deteriorating. We are doing as much as we can to keep her going but I don’t know what’s wrong that she can’t get into a school,” he said.

“It’s been going on now for months now and that’s a long time for someone with special needs.

“It will leave her worse off in herself. We were looking at a book and I was getting her to write the letter ‘a’ but she couldn’t remember how to do it, that’s how badly affected she is.

“She will have no stimulation or playing and is very depressed now that she has no school to go.

“She sees all her other friends and cousins going to school and everyday she asks if she can go to school. It’s not fair on her.

“The Education Board has neglected us and we have been left in a desperate situation where there is no communication from the welfare officer and we have to chase them. They don’t care and I want to know why.

“She talks about school all the time and really wants to go back.”

Both parents say they are unable to home-school Bridgit and are worried how this setback will impact on her progress and development.

Bridgit, who is a very bright and capable child, needs constant stimulation as her disability leaves her with a short attention span.

They say a school education is vital to Bridgit’s development and her family fear it will have a long-term affect on her.

It is not clear the reasons why the family have not been able to secure a place at the school for Bridgit.

When St Mary’s College, Irvinetown, was contacted by this paper they did not provide a response regarding Bridgit’s case.

A spokesman for the WELB stated: “While we cannot comment on individual cases the board would encourage anyone with a query to contact the Children and Young People’s Service directly and their query will be dealt with appropriately.”