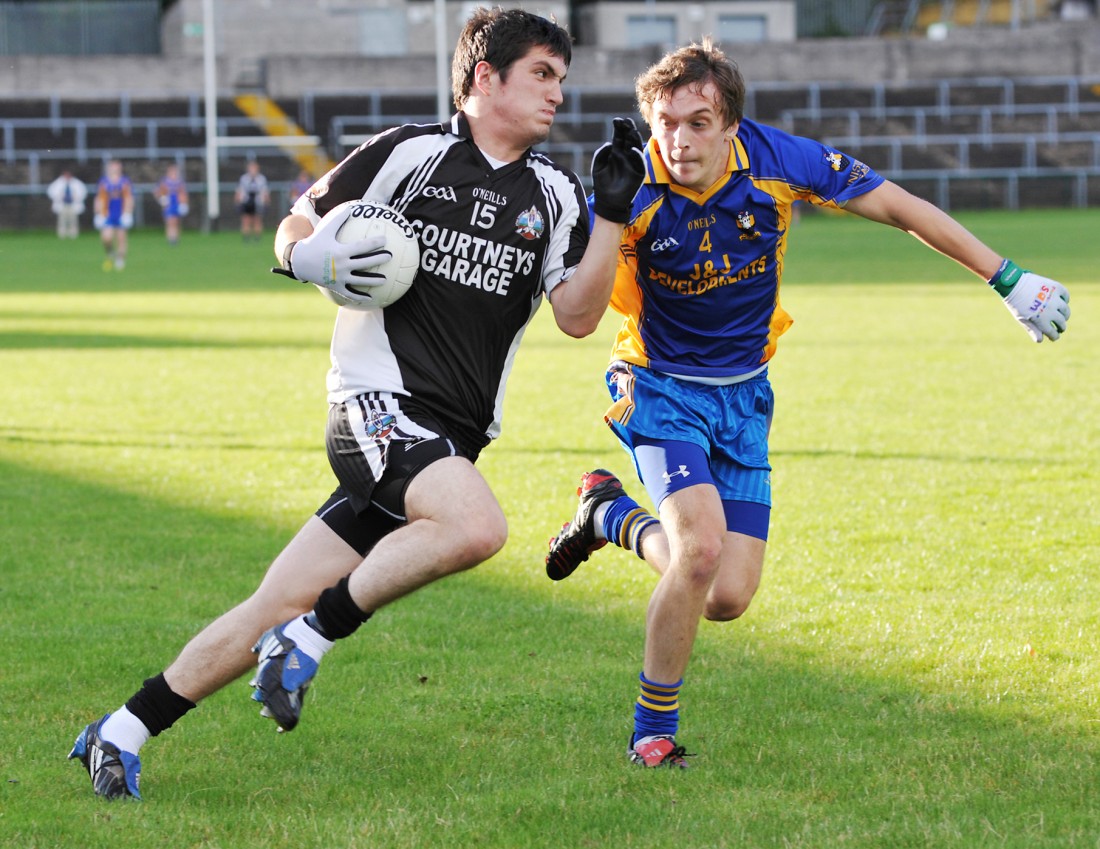 DRIVING FORWARD…Eddie Courtney drives around the outside of Eoin Hamill

This was a very rare result, Aghdrumsee scoring a win over Enniskillen, the last occasion apparently being some four decades ago.

So a memorable occasion last Saturday for Aghdrumsee as they mastered the Gaels and did so at Brewster Park and in the process they effectively scuppered the lingering hopes that Enniskillen might still have been entertaining of making the promotion frame.

From the early exchanges it was evident that a depleted Enniskillen lineout were going to have a difficult evening as Aghdrumsee opened at a lively pace and they raided through for three points all from open play, Stephen Flynn, Eddie Courtney and Mark Leonard on the mark.

However Aghdrumsee were to find themselves pegged back as Enniskillen stopped the slide with a goal. Sean Michael Breen the scoretaker as he fired in a crisp  shot to the net and it was clearly an impetus for them.

They had a decent spell that had points tagged on by Conor Kelly and Aiden McCarron but they too were to find their run stalled as Aughdrumsee bounced their way back with an answering goal which arrived around the 20th minute mark, Eugene Kearins the scoretaker and points were duly added on by Eddie Courtney.

Also on the points trail for Aghdrumsee in what had been an encouraging first half overall had been  Aiden Bannon and Damian Flanagan leaving them three clear for the changeover.

Stephen Flynn shot an early second half point for the leaders but they were to find themselves coming under increasing pressure as Enniskillen made a determined bid to salvage the game.

It took some stout Aughdrumsee defensive work to deny the Gaels what would have been a crucial comeback goal. The Gaels too were to be guilty of some poor accuracy though eventually they did have points from substitute John Slowey and from Eoin Hamill and Brian McAleer.

However the crunch score of the half was to be Aghdrumsee’s second goal which gave them a cushion for the remainder of the game.

This in fact was to be their final score of the half Matthew Mallon neatly tucking away his opportunity on the threequarter mark. Still a long way to the final whistle but Aghdrumsee had been boosted by Mallon’s goal and in the end they worked effectively enough to earn themselves a merited win and indeed  long overdue one over this particular opposition.

For the winners,  Damian and Martin Flanagan at half back were particularly diligent in their defensive work with Stephen Flynn looking sharp in the attack but in the end the two goals scored were vital to their overall effort.

For Enniskillen, Sean Michael Breen had a good hour in the middle third and Eoin Hamill featured in the defence with Niall McGovern having occasional moments in the attack but a side shorn of too many players just came up short in the end.