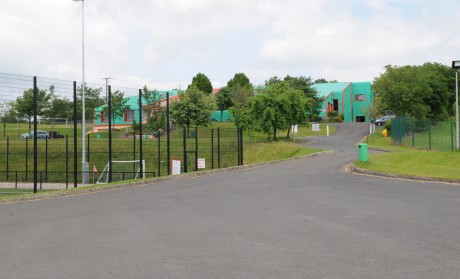 The Bawnacre centre used by truckers and their families

FERMANAGH District Council has been accused of “profiteering” from a charity event after it requested the popular Irvinestown Truck Convoy fund-raiser to stump up nearly £600 for use of a council car park.

Committee members from the Lady of the Lake Festival said they were “disgusted” after receiving a letter on Friday from the council charging them for use of the Bawnacre Centre at next weekend’s festival.

The centre in Irvinestown has been the base for the famous Truck Convoy for the last 12 years providing truck drivers and its supporters free use of the shower and changing facilities.

It is a popular element of the festival attracting people from all over Ireland and to date has raised almost £500,000 for the cancer charity Marie Curie.

However, organisers of the event say they have been forced to relocate as they were reluctant to dip into charity funds to help pay for the fee.

But the council has disputed these claims saying that the Lady of the Lake Festival and the Truck Convoy are two separate events and that it’s council policy to charge charity fund-raisers use of their facilities.

Robert Gibson, Director of Leisure, Tourism and Arts at the council said: “We (the council) understood the Truck Convoy was part of the Lady of the Lake Festival until we were told otherwise at the end of last year.

“The council’s position is that it will facilitate, where possible, a photo opportunity for fund-raisers but if they require use of a council facility they will have to meet the cost.

“We have to treat charities the same.

“The £550 fee provides toilets and changing facilities, lights being on for security reasons and two staff members after working hours.

“The festival is a deficit whereas the Truck Convoy is a very successful fund-raising event and we have to distinguish between the two of them.”

Organisers of the Truck Convoy have now decided to relocate to a new base at Drumharvey Filling Station in Irvinestown.

A spokesperson for the committee said he was disappointed in the council’s decision and believes the fee should be waived because it’s a charity event.

He said: “From a festival point of view we receive little funding from the council and any money they give they get it back and more because we pay for a lot of it.

“I have empathy for the council because they have to clean after but the sum of £550 doesn’t add up.

“We didn’t want to take money from Marie Curie funds to pay for it and as a festival we receive little funding as it is so the only option was to move to Drumharvey Station.

“The event brings in a lot of people from across Ireland and further afield and attracts a lot of tourism to the area.

“The truckers themselves bring a lot of people and draws fans who have a great deal of interest in trucks.

“And now Fermanagh council has sent out a letter asking for this money for the use of their facilities, it seems a bit outrageous.”