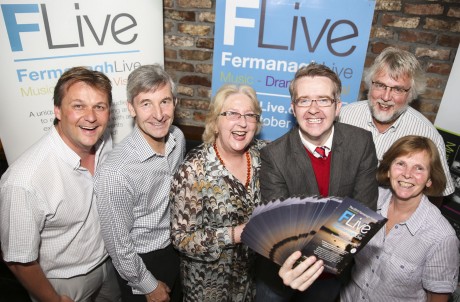 Capitalising on the success of last year’s events, the festival is now operating on an annual basis, having previously operated every two years following its inception in 2006 as the ‘Enniskillen Arts Festival’. It was launched on Saturday evening in the Bush Bar, Enniskillen.

“We all met at around 6.30, those on the board, friends, just for a mini-launch to let people know that Fermanagh Live is ‘live’. We’re up and running, they are fantastic events organised for October,” explained the chairman of FLive, Evelyn Hassard, speaking at the launch on Saturday night.

“It started off in 2006 as a festival that was going to happen every two years, but after the success of last year and the momentum we built, we decided to make it an annual thing. We’re a committee of enthusiastic people,” she added.

The festival is a registered charity, something that Evelyn was very proud of.

“It comes from the heart, only people who are genuinely interested get involved. Because we’re local, it could work any other way. People are creative, and they’ve the best for Fermanagh at heart.”