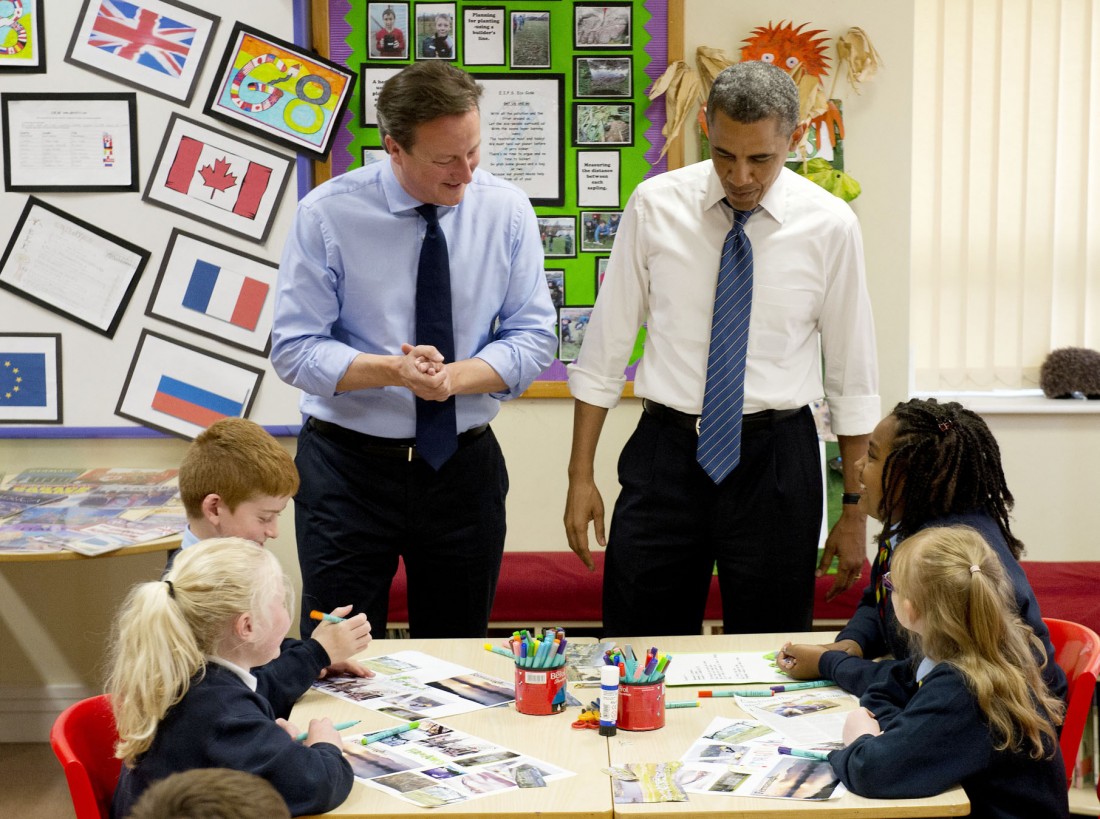 Barack Obama and David Cameron showed their artistic talents to the pupils of Enniskillen Integrated School at the start of their visit to Fermanagh on Monday.

The US President and the Prime Minister took a break from the G8 summit to help pupils at the school with a large mural.

It was all smiles and chat from the two leaders with pupils in the classroom.

Enniskillen Integrated is the county’s only integrated primary and was set up by a cross-community group after the 1987 Remembrance Day bombing in the town which killed 11 people and injured 63.

The politicians were shown around the  school by 11-year-olds John Sammon and Meabh Mackin and they also signed a G8 tapestry.

Obama’s inspirational message on the quilt told the pupils to, “Dream big Dreams”.

There was a bit of friendly rivalry when they joined a group of primary six and seven pupils to finish off a large piece of artwork in the playground.

Both left handed and painting the blue lettering, with Obama taking the capital ‘E’ for Enniskillen and ameron the second ‘n’.

Obama soon admitted he was in trouble, slipping outside the lines, but was told by pupils at his side that he wouldn’t be punished.

Cameron received three loud cheers from the pupils for finishing his letter first, but his American counterpart joked, “I didn’t realise David was going to move so fast”, adding that he was ‘better than David’.

On their arrival into the classroom the two leaders were welcomed with a loud, “Good afternoon Mr President and Mr Prime Minister”.

They were told by teacher Marie Cox that the children were year six and seven and learning about the G8 and the country’s flags.

Ten year old Tommy Roman from Enniskillen told the President there were four prime ministers, one chancellor and three presidents at the G8 at the Lough Erne Resort.

Obama asked the children what the leaders would be talking about. They replied hunger, poverty, and how great it was to have th G8 in Fermanagh.

Pupil, Mia Binnom aged 11, from Enniskillen, read a poem, composed by the class, especially for the G8, that morning .
Fermanagh is wonderful,
Fermanagh is great,
Fermanagh is hosting the G8

The rolling hills and Marble Arch Caves,
Brilliant views and lovely lakes
We’re friendly we’re warm,
we’re one of a kind,
in Fermanagh we have a lovely time.

It doesn’t feel real,
That the G8 leaders are here,
Everybody’s excited so give them a cheer

Teacher Marie Cox described the visit as a ‘huge experience’.

“It wasn’t the typical Monday morning you would have in the classroom.

“We knew there was something up and we might have had a visit from maybe one of the wives, but little did we think this morning that it was going to be President Obama and Prime Minister Cameron.”

She explained that the children had been preparing a little project on the G8, getting the children to find out who the world leaders were and the effect the summit was having on Fermanagh.

“We did a little about each country and when President Obama and Prime Minister Cameron came into the room. They were  just interacting with the children about what they were doing in the classroom.

A group of the children wrote a little poem about Fermanagh this morning and the leaders coming and another little group had drawn a picture of Fermanagh and the wonderful sites.

“We were so excited and so honoured  and enjoyed every minute of it.

“I though it would pass and I wouldn’t enjoy it, but I took in every minute of it,” she said.

“Everybody did fantasticlly well . I think they came in the door really relaxed and set the tone for the whole visit.

“It was all very natural, it wasn’t formal . They had their arms around people, they touched people and that’s what made the difference.”