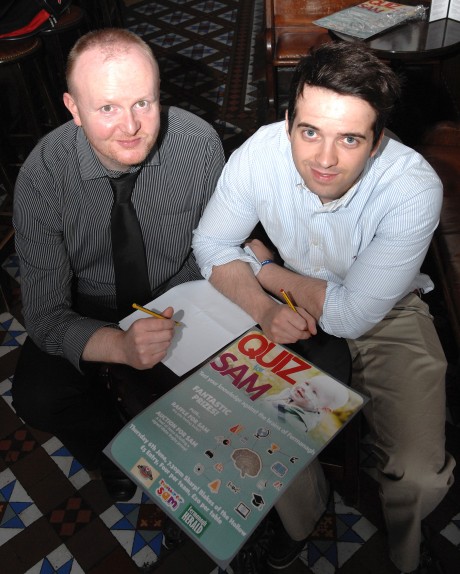 Fermanagh Herald reporter Gareth McKeown and .. . . . . from Blakes of the Hollow making arrangements for the Quiz for Sam which is taking place tonight in Blake’s gkfh45

It’s time to get your quiz hats on as tonight (Thursday, June 6) the Fermanagh Herald and Blakes of the Hollow present a ‘Quiz for Sam’.

The event is to raise funds for the ‘Together for Sam’ appeal and follows on from the successful ‘Singing for Sam’ event held on May 25 which raised almost £3000.

Sam Bradley, the son of Fermanagh Herald Sports Editor Colm, was diagnosed with high risk neuroblastoma in January of this year.

There is a possibility that some of the treatment may have to take place outside of Ireland and therefore as much money must be raised as is possible.

Neuroblastoma is a cancer that presents in less than five patients per year in Northern Ireland. Sam has an aggressive form of the cancer and as such is in the high risk category.

Due to his condition the Sam Bradley Care fund has been set up, with a great response received from across the community.

The money will go towards Sam’s ongoing care and help with financial support for any future treatment that may take place outside of Ireland.

All remaining proceeds will be given to the Children’s Haematology unit in the Royal.

In addition to the 10 round quiz, which will test everything from general knowledge through to the G8 there will also be a raffle and an auction, which features a host of great prizes.

There will also be an auction for a signed Ulster Rugby Jersy, signed Olympic flag from Gavin Noble, plus kit, signed Fermanagh jersey, and signed Ireland 2007 Rugby World cup ball

It promises to be a great night of entertainment, with fantastic prizes, all for a  very worthy cause.

Entry is £5 per person with teams of four.

The quiz begins at 7.30pm in Atrium Bar in Blakes of the Hollow.