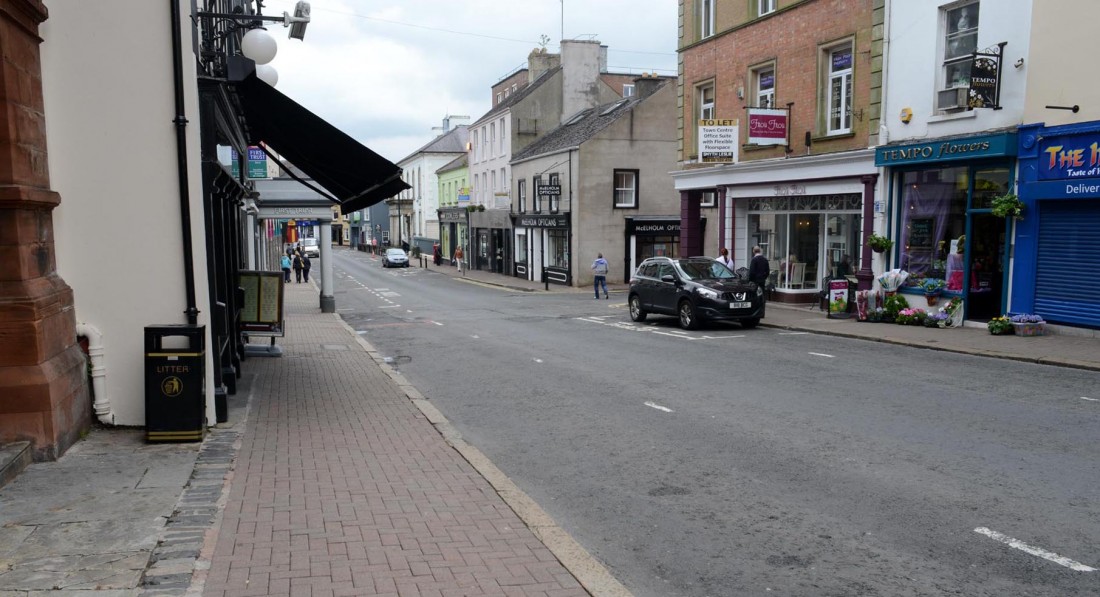 GHOST TOWN.. Townhall Street was quiet on Monday, but retailers have since reported the High Street is ‘back to normal’

JUST over a week since the G8 leaders departed from the Fermanagh turf and retailers in Enniskillen are happy to report they didn’t take the customers with them.

Over the two days of the summit Enniskillen was referred to as a ‘ghost town’ with many choosing to avoid the town  for fear of traffic disruption and delays.

A week on though and the retail landscape is ‘back to normal’, with the shops in the town hoping that two days of lost trade will be more than compensated by long term benefits the result of increased profile and exposure.

Malcolm Sloan, owner of ‘John J Sloan & Sons Ltd’ admitted the Monday and Tuesday were lax, but  explained that businesses were forewarned the increased security could impact on footfall.

“What happened was exactly we thought would happen. Who would come in when there’s a ring of steel around?”
While the two days may have been retail gloom for some, shopping patterns have returned ‘back to normal’ according to Malcolm.

“On Wednesday it was sort of half and half as there were still difficulties out the Lough Shore Road, but by Thursday it was largely back to normal. It has been a great advertisement for Fermanagh and Enniskillen.”

He added: “I have absolutely no doubt the G8 will benefit the retailers of the town in the long term.

“The police that were here, so many of them just thought they were coming to a ring of steel in the west of Ireland, but they loved it here. It really was the best possible result.”

Another to be impacted by the G8 in terms of sales was Dunnes Stores and manager Stephen Clawson explained there was a reduced footfall mainly due to traffic disruption. “Wednesday though was back to normal and Thursday.
Wednesday was a good day in retail terms for us, but there was no doubt we were affected on the Monday and Tuesday.”

While it was a difficult two days for retailers Stephen admitted that much of his lost trade was supplemented the previous weekend.

He added: “There’s no lingering after effects from the G8, we are back to normal. It was a great occasion and now we have to move on from it in a positive way.”

Jim Masterson, the manager of Marks and Spencer, Enniskillen explained that the Sunday, Monday and Tuesday of the G8 had a significant impact on business, with custom down by 50%. He reflected though on an immediate sea change on the Wednesday.

“Like a tap it just came on again, as soon as people could shop again freely they were in. In fact if people had known there wasn’t going to be this disruption the impact could have been much less.”

Like his fellow retailers Jim believes the G8 will benefit the county in the long term.

“ In recent times we have noticed an increase in custom from mid week breaks, people from the Belfast area. We don’t have the southern trade as much, but that has certainly helped.”

“From what we have been told a lot of the police couldn’t believe the welcome they got from the people and they were saying they would definitely come back for a holiday.

“It can only help us with those people going away and telling others about Fermanagh.

“It will though be interesting to see how the Northern Ireland Tourist Board and Fermanagh Tourism seize the opportunity and how they intend to use the success.”