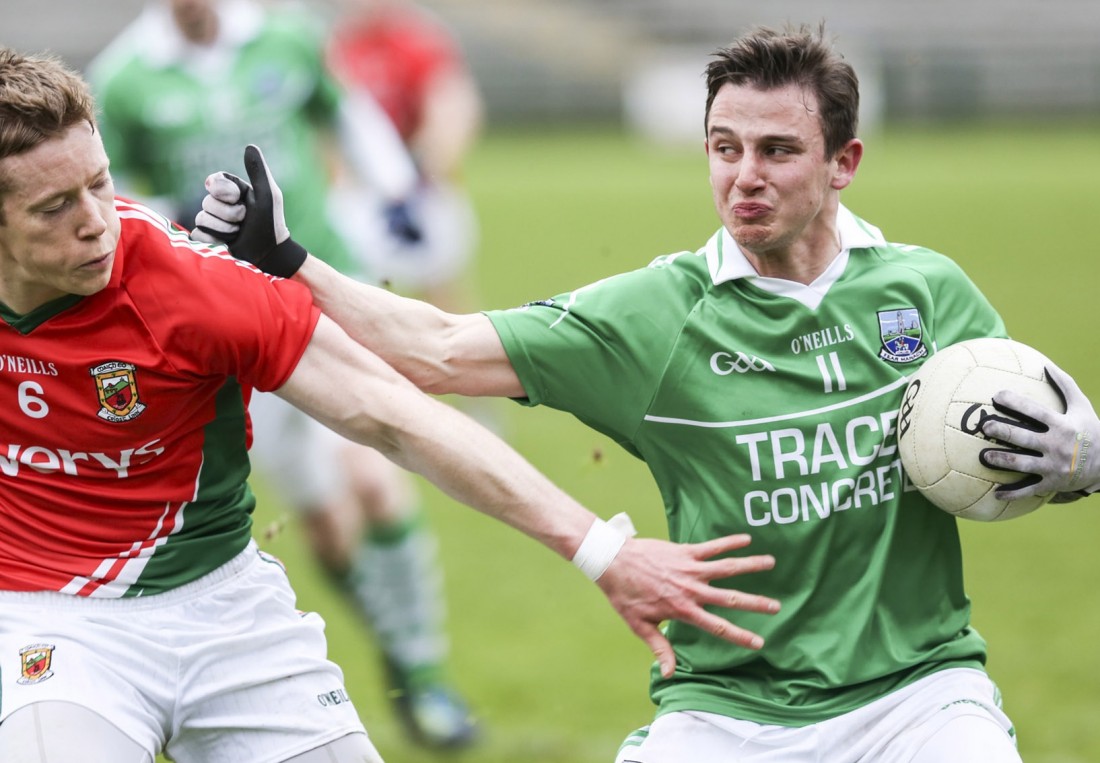 Shane McCabe applies the brakes as he dodges Donal Vaughan

A great evening was had by the large attendance in Brewster Park on Saturday as Fermanagh and Mayo played out a competitive encounter for the ‘Sam Bradley Care Fund’.

A standing ovation was given following an announcement from the Bradley family before the contest thanking everyone far and wide for their continued support as this weekend marked the beginning of their fundraising campaign.

When the game got underway it as Mayo would found their stride that bit quicker. From the throw in the visitors ventured forward and Darren Coen landed the opening score from the right wing. Fermanagh’s response however was immediate, some patience build up play on the stand side eventually seen play switched across-field for Ryan Jones to power past Aidan O’Shea and slot over a well taken point from distance.

The next three scores were all placed balls as Cillian O’Connor and Kevin O’Loughlin tapped over close range frees while Sean Quigley did likewise at the other end. By the tenth minute marker Mayo had a two point advantage as Aidan O’Shea drilled over having finished a swift counter attack and it was the Connacht side who continued on the front foot as they began to pull apart the Fermanagh defence.

Two pieces of good defending from Fermanagh however kept the visitors at bay as full back Aidan Breen made a great block to deny Darren Coen after he breezed past John Irvine and bore down on goals. The block denied an effort on goal but the loose ball found Cathal Carolan who pointed. Moments later it was Enniskillen stopper Chris Breen, making a rare start this campaign that was called into action to keep out a low Cillian O’Connor shot.

Fermanagh although slightly overrun at times defensively remained patience going forward, the build up may have been laboured at times but with Mayo dropping back two and often three defenders to cover the space in front of Paul Ward and Sean Quigley it was impossible to pick out the attackers.

Wisely choosing to retain possession Fermanagh continued to prod and prode looking to penetrate the compact defence. Eventually having held possession 50yards from goal for a good 90seconds, Ward managed to find space within shooting range and he duly rattled over a well taken score on 17minutes. The hosts picked up the next break ball from Kenneth O’Malley’s kickout and Shane McCabe found Ward who won a free which he also converted to leave just one between the sides at the mid-point in the half, Mayo 0-5 to 0-4 to the good.

This however was as close as Fermanagh got for the rest of the game. Mayo shifted up a few gears over the remainder of the half and the Division 1 side looked very impressive. They are due to face Galway in the Connacht Championship in a fortnight’s time and they produced some excellent attacking play during this dominant spell which seen them outscore their opponents 1-5 to 0-1.

Centre half forward Richie Feeney would kickstart Mayo’s dominance with two points from play before Coen tapped over having collected a neat slipped handpass from O’Connor who’d gathered an incisive kickpass from McLoughlin.

Having been dissected moments earlier for Coen’s point the Fermanagh defence again wilted as a sweeping move brought about the opening goal. Feeney and full forward Aidan Freeman were heavily before centre back Donal Vaughan finished the move with a low shot into the bottom left corner.

Fermanagh were reeling at this stage and were off target with efforts from Kane Connor and Ward, Freeman however confidently fired over another Mayo score. Ward did manage Fermanagh’s first score in some 14minutes but the half would end with another Mayo score. Goalkeeper Kenneth O’Malley coming forward to strike a 45 over the bar to send this side into the break leading 1-10 to 0-5.

Peter Canavan introduced Ronan Gallagher and Declan McCusker at half time but Gallagher’s first piece of action seen him lift the ball out of the net as Aidan Freeman gathered possession from another fine McLoughlin pass, burst past Aidan Breen and hammered the ball into the roof of the net beyond Gallagher.

The goal took Mayo eleven points clear but to their credit Fermanagh battled back. Young Che Cullen who had an effective game at wing back strode forward with the ball before slipping it to Niall Bogue, the Kinawley man launched the ball into Quigley, his flick put Ward through on goal but the forward as brought down for a penalty kick. Daniel Kille’s initial effort hit the underside of the crossbar but Lisnaskea man was on hand to palm the rebound into the net.

Buoyed by this goal Fermanagh produced a superb period of play with Shane McCabe the fulcrum of each attack. His pinpoint ball inside to Ward led to a point and although Seamus O’Shea landed a good left footed score for Mayo, Fermanagh were beginning to turn the tide.

McCabe’s quick free sent Ryan Jones on a strong run past two defenders and he drilled over from close range. Fermanagh continued to dictate proceedings winning the majority of break balls, Cullen again was heavily involved marauding from wing back, he found Ward who was fouled, Sean Quigley did the necessary and it was back to a 6point game, 2-11 to 1-8 by the 50th minute.

Daniel Kille would register the point of the game from near the sideline 35yards from goal after good hold up play by Kane Connor while moments later Kille played one of the passes of the night to send Ward through on goal, the Derrygonnelly man however pulled his shot a goal wide on the right side. A three pointer there would have left just two between the sides.

With Fermanagh still in full flight Quigley tapped over a free and Ryan Jones was unlucky to hit the post after another strong run. Mayo would register their first score in some 13minutes with a Kevin McLoughlin free but Kille also added a free following a foul on substitute Ruairi Corrigan.

With 6minutes to play and the score at 2-12 to 1-11 Mayo ended the brave Fermanagh fightback with scores from two substitutes. Murphy netted after good play from O’Connor while Varley clipped over two points to put his side into an unassailable lead before Kille converted a late free as the game ended 3-14 to 1-12.

All in all it was a good run out for Fermanagh who have been inactive for a number of weeks, Canavan had the opportunity to see a few more of his squad getting game time while he will be hopeful one or two niggling injuries will clear up on those who didn’t feature.

Mayo too will have gained from this competitive encounter as the look to put the finishing touches to their Championship preparations, twelve different players registered scores for the Connacht side and while the football was enjoyable the cause in which the players played for was the most important thing of the evening.