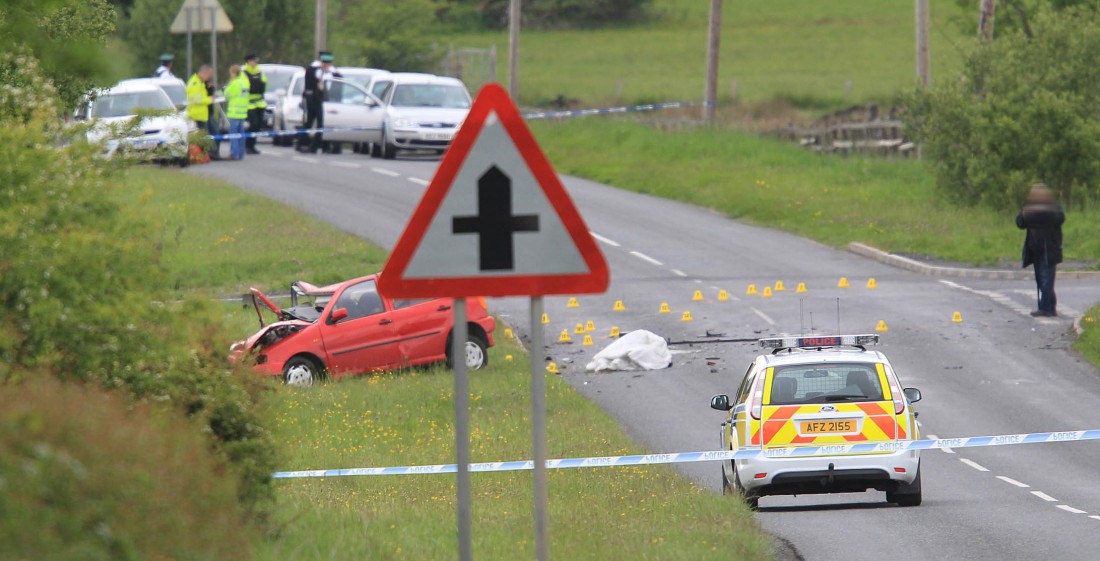 AN inquest has heard that a 26-year-old vet from Kesh, who was a backseat passenger in a Volkswagen Polo, was killed when the intoxicated driver from Drumquin, Co Tyrone drove through a junction into a family car.

The driver, Ryan Edward Maguire (22) from Riversdale Road, Drumquin, died at the scene while Rodney Andrew Wilson from Ardvaney, Kesh was pronounced dead the following day in Altnagelvin Hospital. Another back seat passenger in the car, Ciaran Donnelly (28) of Cloy Road, Ederney received extensive injuries and has not been able to work since the horrific crash at Ardess crossroads near Kesh on the afternoon of Sunday June 3 last year.

The Volkswagen Passat containing a couple and their two children finished in a field on its roof. The father was “sore” after the crash while his children were “distressed” but physically uninjured. However the mother suffered bruising and needed a plate put into her left arm.

The inquest held in Omagh yesterday (Tuesday) also heard that the driver had three illicit drugs in his system as well as traces of cannabis. The three men were returning from the Rory Gallagher Festival in Ballyshannon, Co Donegal. At the time of the crash visibility was good and the road was dry.

Mr Maguire was one and a half times over the legal alcohol limit and the Coroner Jim Kitson said there was “no doubt he should not have been driving on this occasion.” The inquest was also told that the deceased driver and his two rear-seat passengers were not wearing seatbelts.

A forensic scientist concluded that although a rear brake on Mr Maguire’s car was leaking fluid he did not believe it was the cause of his failure to stop at the junction. Damien Coll said, “There was nothing to indicate the brake pedal or handbrake had been applied on the Polo. In my opinion the defective rear brake was not a factor in the Volkswagen Polo driving straight into the Volkswagen Passat.”

Mr McColl explained there were no brake marks on the road and the Polo had fully functioning front brakes, rear offside brake and hand-brake. He stated that the driver did not slow his car at all on his final approach to the junction and was travelling at a speed, possibly up to 50 miles per hour that made it “impossible” to stop at the junction.
He also stated that the road had an advanced warning as well as a ‘give-way’ sign and a driver “should not have any difficulty taking the junction.”

Following the collision the Road Management Unit, consisting of the PSNI, Road Service and “civilians” examined the scene and concluded that there was no need to change the signage or road markings at the junction.

In his judgement, the Coroner Mr Kitson expressed sympathy with the grieving Maguire and Wilson families, and said, “Clearly this is a dreadfully distressing case and as father of an 18-year-old boy I can only imagine the loss and devastation from this tragic accident. Unaccountably for reasons we may never understand it appears Ryan (Maguire) approached the junction and failed to stop. Regrettably he should not have been driving on this occasion.”