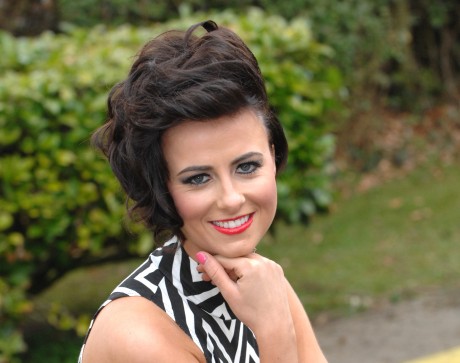 ON TOP OF THE WORLD…Lisa McHugh

In the second of a bi-monthly inside look at the local Country music scene, Ryan Smith, interviews Lisa McHugh – a Scottish-born musician who’s taken the scene by storm…

WHEN she first moved to Ireland it’s hard to tell whether she herself knew what was waiting for her.

But Glasgow-born Lisa McHugh has taken Country music to a whole new audience – and she loves Fermanagh so much that she’s now living here.

“We’ve been very busy over the last six – eight months things have taken a massive leap for us since we released ‘Why’d You Come in Here?’ it just went mad,” she said.

24-year-old Lisa was born in Glasgow and Country music has been her passion for long before that.

“It wasn’t necessarily a cool thing to say you listened to Country music or you were going to a Country Dance instead of a disco – but I just loved it. And when I would go with my family or my parents, I was definitely the youngest person there in nearly all the venues I went to,” she explained.

Though, in Fermanagh, certainly, that mentality has changed.

“And we really noticed then (when we released ‘Why’d You Come In Here?’), especially with the younger generation coming to see our shows. But it’s not just myself that they would come along to see. There are other artists on the scene – the likes of Nathan Carter, Derek Ryan.

“I don’t know why it is – I just think that since the younger artists have started touring, quite a lot of people can relate to it and are enjoying it.”

Just over a year from when her album, ‘Dreams Come to Life’ was released, Lisa’s thoughts are turning towards a new album of original material.

“Like everything it depends on how busy you are,” she mused.

“And at the minute, because the Country scene has taken such a leap, the demand for gigs has taken a leap as well – and so it’s about finding the time when you do have a day off to get to the studio.

“I’m doing some different songs this time. It’ll be more modern songs – I always love to challenge myself and I’m delighted with how it’s going.”

Lisa plays acoustic guitar, and went on to describe her song-writing process.

“I suppose I’d never just sit down with a piece of paper and pen and say ‘OK, I’m going to write a song’ – I just find that that’s the hardest way to possibly do it.

“If I was driving along to a gig – if I was at some place and something happens – well it sticks in my head and I think ‘I can maybe try and write something about that’.

“I suppose the most personal ones turn out the best,” she added.

A self-confessed fan of trad music, pop music – and indeed R ‘N’ B music, Lisa enjoys relaxing outside of her busy schedule.

“Not that we’d have many days off – some people would say I’m a workaholic!

“In my spare time, I enjoy sitting in someone’s house with a group of friends, with a bottle of wine – a DVD.”

Though when it comes to a live show, things are taken up a notch.

“People work hard all week and they’ve chosen to come out and spend their money on you – so I try make sure that they enjoy themselves. There’s nothing nicer than for someone to say I’d a bad week and this really lifted my spirits.”