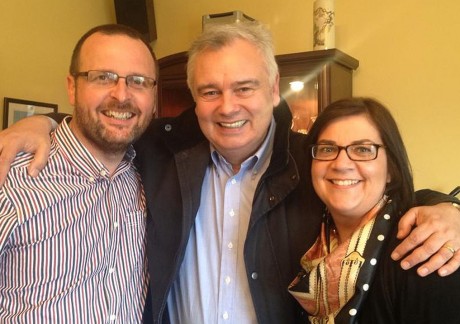 HOLME SWEET HOLME…Sam Balmer, Eamonn Holmes, and Louise Balmer pictured when Eamonn visited the home of Sam and Louise for filming of Songs of Praise

The Christian work of local man, Sam Balmer, and his wife Louise, is to be  recognised in an upcoming episode of BBC show, ‘Songs of Praise’.

Sam and Louise, who are both involved in Fermanagh Christian Fellowship based at Belmore Street, Enniskillen, were put under the spotlight this past weekend by show presenter, Eamonn Holmes, who visited the family home and spoke to Sam.

He asked Sam about his international work with Bible Educational Services (BES), where he has brought the word of God to 45 countries and  30 different languages.
Louise’s local work with the Postal Bible School, was also the subject of the popular Sunday evening programme.

She helps send out Bible lessons to groups, Bible classes, schools and Sunday schools in Fermanagh, Tyrone and Armagh.

Sam explained a bit more about the visit of Eamonn to the family home.

“Eamonn was very nice and very friendly,” he said, “and was able to keep you relaxed. We were very nervous before filming, but he made you feel very much at ease.”

In addition to the three and half minute interview with Sam, extra footage was taken of Fermanagh Christian Fellowship’s Sunday worship, where Sam’s son, Matthew

spoke and the rest of the congregation sang during a children’s service.

Footage was also taken of the volunteers involved with both Postal Bible School and Bible Education Services.

Sam has been involved full-time with Bible Education Services International for six years now and locally for over 15 years.

When asked why he got involved, he explained how he received a calling.

“We really felt God calling us to be part of it.”

He explained that the resources that Postal Bible School send out are designed and edited by Bible Education Services.

BES works with a number of different organisations and Churches, providing them with a 12-year curriculum for children and teenagers to study the Bible.

“We work alongside a number of organisations who are meeting physical and material needs in many of these developing countries and we seek to bring the spiritual input”, Sam added.

The Songs of Praise episode will be aired on May 26, with much of the recording done previously when the BBC were in Enniskillen to film ahead of Remembrance Day.