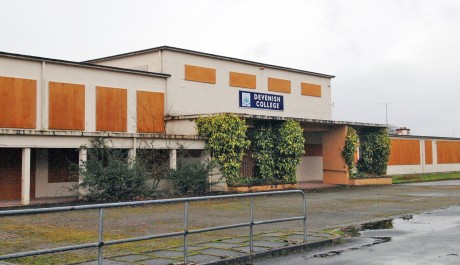 The former Duke of Westminster High School Kesh, where a fire took place at the week-end

POLICE IN ENNISKILLEN are investigating a week-end fire that which have described as, ‘criminal damage’ at the old Duke of Westminster school in Kesh.

The school has been closed since 2006.

The fire service attended the scene after receiving a report at around 4.30pm on Sunday last, April 7.

The fire which caused damage to part of the roof of the building, was been described as, ‘well-developed’ at the time that the fire service arrived.

She stated: “Once again, it appears that this disused school building has been the target of vandals,” she said.

“This time arsonists attempted to set fire to the Youth Wing causing considerable damage, while in the past, lead and other items of value were removed from the school roof and stolen from the building.”

She went on: “I utterly condemn this latest attack on the building, one that served the community of North Fermanagh for 50 years. It is shameful that there are members of society whose sole aim is to damage and destroy the property of others.”

Councillor Barton encouraged those with any information to contact the police.

The building is owned by the Western Education and Library Board (WELB).

A spokesperson said: “The Board can confirm that a fire took place at the former Duke of Westminster High School building on Sunday morning, April 7 2013.

“As the incident is now the subject of a police investigation, the Board is unable to make any further comment.”