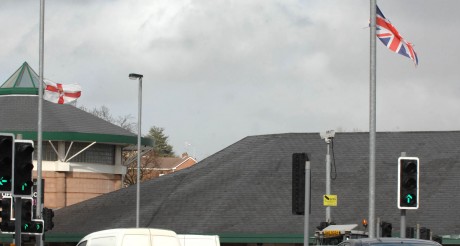 THE removal of tricolour flags at the Cornagrade Road in Enniskillen has raised questions over why Union flags in the town continue to fly.

Some Union flags have been removed, however, many remain including at Gaol Square – the main entrance to Enniskillen from the East.
Describing the removal of some as a welcome move, Sinn Fein MLA, Phil Flanagan expressed concern that more action is still needed.

“The removal of the tricolours from the Cornagrade Road, which were erected for the Easter period, and some of the Union flags from across Enniskillen, is a welcome move,” he said.

“The flying of flags in the short period immediately before and after an event is now a common and accepted practice, but I genuinely cannot understand why some extreme elements of the unionist community insist on displaying flags from early March until late September, particularly in the town of Enniskillen, where some never come down at all.”

He called on those ‘within positions of influence in the unionist community’ to demonstrate positive leadership and seek the removal of flags from across Enniskillen.

But, Enniskillen councillor, Basil Johnston (UUP) labelled it as a, ‘province-wide issue’, and stated: “I have no quick fixes or solutions to it.”

“If they’re down, they’re likely to go up again, I would think.”

He added: “There has been far too much flag flying throughout the country, generally speaking and flags have been degraded by the way they’ve been flown.

“Some of them have turned into ribbons, and that’s not the way to fly the flag of any country.”