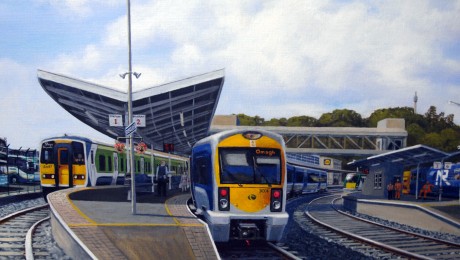 COULD IT BE…David Briggs, a local artist, was commissioned by Headhunters Railway Museum to paint a portrait of Enniskillen Station as it might look if Enniskillen still had rail services in 2013.

THE PROPOSED PLAN for a  £638m railway network in Fermanagh has been met with a positive response from local councillors.

At last Wednesday’s monthly meeting of the Council, Bert Johnston was first to welcome the move.

“I remembered them being closed in 1958 and we were promised a motorway to Enniskillen”, he recalled. “We never got that and we never will get that.”

He continued: “What we should be doing is accepting railway into Fermanagh. The offer is there and we should be taking it up. We should now go for a railway.”

Mr Johnston also acknowledged that the roads need improving, describing the road from Fivemiletown to Enniskillen as a, “snake track”. That aside, he hopes the plans for the railway come to fruition.

“I don’t envisage I will get the first run on it, but I would like to think I did something for County Fermanagh, supporting the return of the railway.”

Stephen Huggett expressed the hope that, should the plans go ahead, the railway would not end at Enniskillen, but would rather go as far as Belcoo.

Mr Johnston agreed and hoped it would include all the villages of Fermanagh, such as Ballinamallard.

Raymond Farrell said it was a question of accessibility.

“You can’t get into any town with the traffic congestion. It would bring people in, create jobs, promote local business. If Councillor Johnston isn’t here to see it, hopefully I will. I would support that.”

Barry Doherty said he agreed with the views of his fellow councillors, and supported the planned railway, but issued said he had concern about the state of the roads.

“I hope it won’t take the eye of the Enniskillen bypass,” she added.