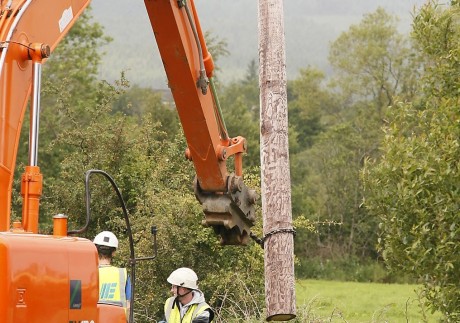 THE invisible substance placed on telegraph poles in the Derrylin area could be potentially dangerous to animals and the wider environment, according to Fermanagh councillors.

Speaking at Monday night’s meeting of the Council, Bernice Swift (Independent) expressed her concern about the substance placed on the poles. She demanded an immediate and thorough investigation into the matter.

“I want to find out what substance has been put on poles? Who put them on? Is it harmful to our food chain?”

She suggested that animals could rub on the substance and, in turn, spread around the potentially harmful substance.

“We require  proper clarification if this substance is noxious, poisonous or harmful to the livestock on the land and all those farmers in contact with livestock.  Does this invisible and unnamed substance affect the Claddagh River or our water table?”

She went on: “These are very real questions that must be truthfully answered and those held to account for placing an unnamed substance onto poles.

“The fact that this invisible substance which only shows up under infra-red imaging suggests some elements of alien chemical, but not to scaremonger, we need it investigated.”

Barry Doherty, who lives in ‘Quinn’ country’, agreed, and said that he had been approached by a number of constituents who had, ‘serious concerns’.

The chairman, Thomas O’Reilly assured both that the council would make enquiries as to what had been put on the poles and take it from there, to which Councillor Swift responded: “I want this to go a bit further.”

However, the council’s chief executive, Brendan Hegarty submitted that the council had no right to ask who put the substance there and why.

He said that the council’s Environmental Health Officer would liaise with the relevant department if there were health issues, after which the council could then write letters.

Alison Brimstone suggested the Council should liaise with the PSNI at local level, without having to put it in a letter.
But, when Stephen Huggett told the Council he would be meeting with the PSNI District Commander to ascertain information, this appeased Councillor Swift.

She said she was happy enough to deal with the departments of agriculture and environment at this stage, and await further information from Councillor Huggett.