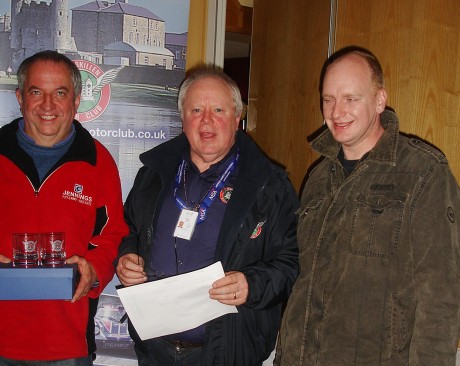 Benny Grainger, Drew Wilson and David Howard, the winners at the weekend

SOME sixteen crews left McAleer’s Spar, Irvinestown at 8.45pm last Friday night to battle it out on Enniskillen motor Club’s round of the McGrady Insurance N Ireland Navigation Rally Championship.

The route would take them through the hills north and later south of Trillick, eventually winding their way east of Brougher Mountain and ending up in ‘the wee small hours’ navigating a tortuous route south via Glengesh and Imeroo to finally finish at Woodhill west of Kilskeery for Classes 3 and 4 as Classes 1 and 2 went on to reach home by way of Edenagee Hill, Shanmullagh East and Crossan finally to Drumharvey, Irvinestown, once again.

As expected, winners last time out, Lewis Boyd and Leslie Young [Vauxhall Vectra] started at No 1 with James Wood and Chris Ragg [Ford Focus] at No 2 followed by John Henderson and Lloyd Cochrane [Nissan Micra] whilst Benny Grainger and David Howard [Vauxhall Astra] at 4 were the final crew in Class 1 [Expert]. Enniskillen driver, Benny Grainger, first competed on this event some 40 years ago, on his first rally and was hoping for a good result to mark the event.

As it turned out, Grainger and Howard went on to score an emphatic win, a result which was well received by the enthusiastic crowd at the finish in Mahon’s Hotel in Irvinestown.

In Class2 [Semi-Expert], Ciaran Carey partnered by Rachel Muldoon led the way at the off, with the Erne Safari being their first outing of the year, as Rathfriland was postponed due to heavy snow and then they were part of QUB’s organising team for last month’s Jumping Jack Rally.

Following them, as the only other crew in this Class, were Alistair Barker and Gareth Deazley [Peugeot 206].
First away in Class 3 [Novice] were Barry Gilpin and Denis Morton [Ford Fiesta] with Gavin Campbell [Mazda MX-5] next followed by Omagh father and son crew James and John McCay [Peugeot 106]. Last place in Class 3 was taken by Charlie Dunleavy and Roy Lindsay [Honda CRV].

Then came Class 4 [Beginner], the biggest class on the night with six crews, all of whom bar one had attended Drew Wilson’s Rally School nights held over the previous two weeks. First away were Scott Thompson and Darran Flanagan [Peugeot 205] then another father and son duo, Eddie and Ronan McCaffrey [Saab 95 Estate] followed by eventual Class winners, Mark McCaffrey and Marcus Carson [Peugeot 406] at No 3. Fourth off were Mervyn Wilson and Michael McGowan who, due to a last minute drama with distributor problems with Mervyn’s newly-rebuilt, beautiful MkII Escort 1600 Sport, had to resort to a Nissan Navara. In fifth came Kieran Murphy and Mary Winchester [Audi A6] and finally last out was the very brave crew of Johnny and Conor Kennedy- they drove the whole event in their Mazda MX-5 with the top down!

From the beginning it was the experienced, Class 1, crew of Henderson/Cochrane who remained penalty-free as far as Time Control D [TC D] with Woods and Ragg hot on their heels just one mark down.whilst Young/Boyd were breathing down their necks a mere mark behind that and Grainger/Howard a mere six further back.

In Class 2 at this juncture, Barker/Deazley were a substantial 9 marks ahead of Carey and Muldoon.
In Class 3 Novices Gilpin/Morton steered their Fiesta to a commanding lead, dropping only a solitary mark with nearest rivals, a gaping 16 marks in arrears.

Class 3 Campbell/Campbell had had an uncharacteristic ’30’ at Secret Check 3 [SC 3] to leave them in third place as Dunleavy/Lindsay struggled to get into any sort of rhythm accruing a total of some 130 penalties at this Control from which they never recovered.

Class 4 leaders at the same TC D, by a margin of five, were the crew of Wilson/McGowan closely followed by McCaffrey and Carson.

In third, some sixteen points adrift, were Eddie McCaffrey and son Mark [the youngest competitor at 14 years]; a terrific pace considering this was their very first event! Fourth placed Thompson/Flanagan had been caught out by SC 1, collecting a ’30’ on this occasion.

In fifth and staying warm despite the lack of a roof were the Kennedys and also on their very first Navigation event, was sixth-placed crew, Murphy/Winchester, who also had been caught out  by SC 1.

But some thing had changed by the time crews reached TC K, the finish for Classes 3 and 4.

These two classes had, as per Association of N Ireland Car Clubs’ [ANICC] guidelines, been given easier route instructions and a shorter distance. Classes 1 and 2 still had to soldier on to TC O at this point. In fact to assist the Beginners in Class 4 Enniskillen Motor Club had given a ‘panic envelope’ only to this Class. The aim here is help the growth of competition in Navigation Rallying and with the assistance of the Night Navigation Rally School classes held a short while ago, Drew Wilson, Clerk of the Course [CofC] said he was very pleased with the numbers who turned out in Class 4.

So, at the finish Class 3 was won by Gavin Campbell and Stuart Campbell on 47 marks whilst Barry Gilpin and Denis Morton were second on 142 marks and third were James and John McCay on 391 marks. John did admit to several ‘silly errors’ over the final section which, in fact, no-one in any Class ‘cleaned’.

In Class 4 the crew of McCaffrey/Carson won out well with a great run over the final section, TC J to TC K,  dropping only 5 penalty marks to win with a total of 56 marks and Wilson/McGowan found this last section difficult spoiling a great start to end up with 142 marks.

What a night for youngster Ronan McCaffrey, partnering his dad Eddie to a magnificent Third in Class on this, their very first Navigation Rally!  CofC, Wilson was full of praise for the pairing at the finish saying that, ‘they had set themselves  a very high standard indeed to maintain for the next time!’

The Kennedys did eventually make it to the finish where, after two hours in the open-topped MX-5, were very glad to get indoors and help themselves to the welcome hot buffet provided by Mahon’s Hotel. The Audi crew of Murphy and Winchester called it a day at TC H but vowed that they had some unfinished business and would be back on the maps soon.