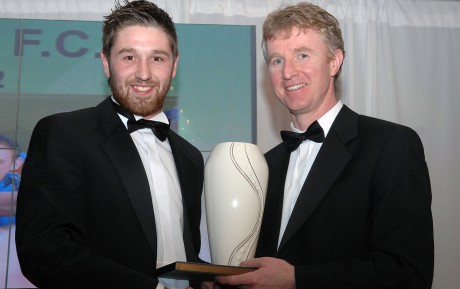 Brendan McCreesh of McBride & McCreesh Opticians presenting Mark Stafford, captain of the Ballinamallard team which won the Senior team of the year award.

THE WINNERS of the 16th Fermanagh Herald Sports awards, run in association with Belleek Living,  were announced on Friday evening (February 15) at the Manor House Hotel.

The compere for the black tie affair was the BBC’s Denise Watson.

The recipients of the awards were as follows:

Youth Sport team of the Year:
Ballinamallard Under 18s, Football